Home Issues RAW FROM THE SAW: The Flaming Lips
IssuesMagazineMinistry of CoolPietyweb-featured

RAW FROM THE SAW: The Flaming Lips 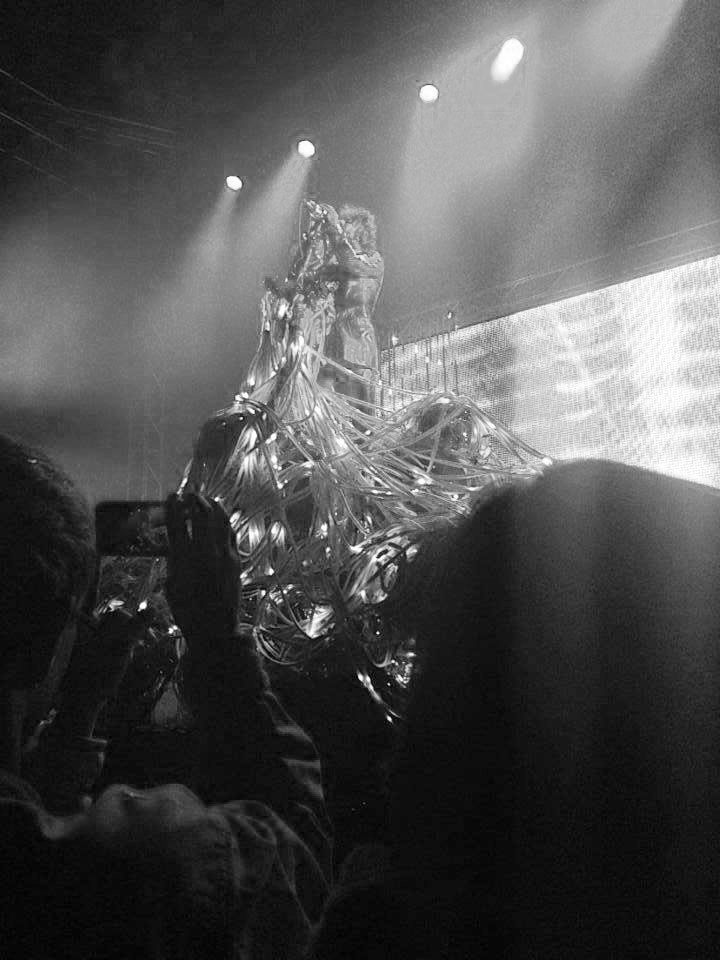 As lead singer of The Flaming Lips, Wayne Coyne takes to the stage on Nov. 10 and ascends his throne for the night—a robotic podium constructed from metal globes and coils of fiber optic lights—rapturous applause erupts throughout Cornell University’s Barton Hall. Then, suddenly, the distorted electric riff to “The W.A.N.D” echoes throughout the venue, and the audience is set in commotion.

Hidden from the audience’s sight, The Flaming Lips—currently on tour for their latest studio album, The Terror— cut straight away into their new material, bridging the sci-fi piano scuffle of “Look…The Sun Is Rising” with the record’s title track, where haunting tones give way to erratic strumming and muffled vocals. The song dies down and smoke disperses, revealing a distressed Coyne, baby doll in hand, trembling in the darkness. Coyne surveys the audience from atop his perch. Grinning, he leans into the microphone and says: “I can smell a lot of marijuana being smoked. Is that legal here?”

Coyne’s eccentric stage presence serves as a mere forewarning to the freakish chaos that would fill the Flaming Lips’ performance—a 90-minute psychedelic experiment into the darkness and sheer madness that drives “The Terror”.

The performance’s theatrics and set list complemented the menacing and foreboding nature of The Terror. Even the band’s classics were adapted to fit the new, ominous mood, like the slowed-down and mid-set performance of “Race For The Prize”. The song, driven by electro-rhythms and a pounding bass line, produces one of the most moving moments of the nights, as Coyne sung out: “Theirs is to win/ if it kills them/ they’re just humans/ with wives and children”.

Taking full advantage of his elevated position, Coyne guided the receptive crowd through an endless and unified swaying and head-bopping party. It created an interesting contrast in energy to the rest of the band, which sat nonchalantly plinking away at their instruments.

The night concluded with a two-song encore, which was kicked off by the synth-smeared ballad, “Do You Realize??”, widely considered to be the Lips’ most popular song. The honor of the final song was given to “The Terror’s” slow-roiling, percussion heavy closing track, “Always There…In Our Hearts”, which fades into a voiceless chorus of clambering drums and guitar distortions. The frenzy of noise was matched with an onslaught of confetti and strobe lights, leaving the crowd in a dazed stupor.

The show may have been lacking the dream-pop tunes of the band’s early days, but it was a Flaming Lips performance just the same—energetic and lively. A light show of epic proportions, the night’s performance proved that even in their 30th year, the Lips are still blazing ahead on the journey to pioneer new sounds and visions.