RAW FROM THE SAW: Bates Motel 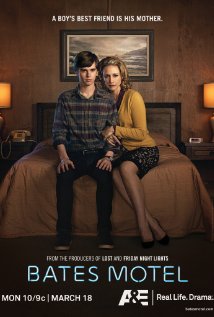 In this edgy new drama, viewers travel into the twisted mind of teenager Norman Bates as he and his mother Norma attempt to adjust to their not-so-welcoming new neighborhood. After deciding to reinvent their lives by moving into an abandoned motel (which they rename Bates Motel) in the small and charming beach town of White Pine Bay, Ore., Norman and Norma run into a number of dangers which put their lives on the line. In addition to Norman’s alcoholic half brother, Dylan, abruptly returning to the family, and a violent break-in to the Bates’ new home, Norman begins to experience unusual personality conflicts of his own. His inclination to get himself into trouble, including his decision to trespass into Officer Romero’s house to “investigate for his mother,” leads him to uncover more skeletons in the closet than he can handle, and he comes to realize that at 17 years old, ignorance may in fact be bliss.  As the series unfolds, it becomes increasingly difficult for Norman to separate his unruly imagination from reality, and that struggle drives him towards madness.

Character development is one of the show’s strongest aspects. While Norman does his best to protect his mother and new friends, their characters are revealed through their reactions to his strained efforts. The overwhelming interdependence of Norma and Norman’s mother-son relationship is unusual and detrimental to both of them. Their heavy reliance on each other is crippling, as they adjust to life without the estranged Mr. Bates, Norma’s sketchy relationship with overly protective officer sheriff Romero, and the return of formally emancipated Dylan. Norman’s social skills are clearly defined by his rocky past; at his new school he constantly flits between love interests, struggles to form friendships and spending his free time with his mother.

While “Bates Motel” is exciting and loaded with thrilling plot twists, the characters are also very believable, each with strongly defined personalities and characteristics. Watching the plot and characters develop and White Pine Bay secrets continue to unravel, “Bates Motel” fans (myself included) are looking forward to the rest of the season. I strongly recommend it to all thrill-seekers who think they can brave the twisted nightmares hidden beneath the surface of a small town.