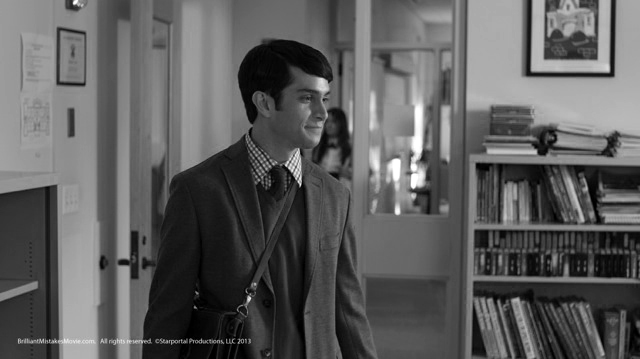 The stuffy July air buzzed with nervous excitement as Ithaca College graduate Daniel Dambroff (College of Humanities and Sciences ’09) surveyed the makeshift holding space of the New Haven, Conn. studio. He was surrounded by hundreds of other hopeful actors and actresses, crowded onto couches, scripts in hand, some practicing lines, some chatting, some napping. All were auditioning in hopes of landing a role in local director Paul Brighton’s independent film Brilliant Mistakes.

Dambroff quickly realized it would be difficult to size up the competition, since the crowd was full of actors and actresses auditioning for every part in the film. He had his heart set on the lead: Marcus Wright, a young teacher who struggles to deal with love and loyalty in the aftermath of an accident that leaves his girlfriend in a vegetative state. The role sounded like a perfect match to the sort of boy-next-door roles that Dambroff felt best suited his acting style. The casting call had described Wright as “easygoing” with “boyish good looks.”

Dressed in a skinny tie and light blue button-down shirt that offset his dark hair and eyes, Dambroff hoped that he’d achieved the look they were searching for. He took a bit of comfort in knowing that he couldn’t possibly have done any more to prepare for the audition. Now all he could do was wait.

Focused on keeping his nerves at bay, he occupied himself by attempting a puzzle, listening to music, and occasionally getting up to stretch his legs. He knew that the odds of booking work were always slim given the nature of the business. Beyond that, he knew that compared to much of his competition, he came from a relatively unconventional acting background. Two years before, he’d received a degree from IC with honors, but had spent his time there studying psychology, rather than pursuing his passion for acting. If this audition turned out in his favor, it would finally prove that all his risks had been worth the trouble. Still, knowing the odds of landing a lead role, Dambroff hadn’t mentioned the audition to anyone other than his parents. He didn’t need the extra pressure.

While Dambroff knew his decision to attempt professional acting rather than pursuing a career in psychology was risky, he’d thought it through carefully. Though he’d both enjoyed and excelled in his college studies, as his senior week had approached, he’d felt torn about where his next steps should lead. Shortly before graduation he realized that his love for creative pursuits, particularly acting, outweighed the future that he saw for himself in psychology.

“The thought in my mind that I should pursue acting kind of got greater and greater and greater, and then eventually I realized that I needed to at least give this a shot, because if I didn’t I’d always regret it,” Dambroff said.

It was a daring choice, but wouldn’t come as a complete surprise to those who knew him best, and had seen his love for the art develop through the years.

He was first captivated by stage acting at the age of eight, while sitting in the audience as his father performed in an Irvington Town Hall Theater production of South Pacific. The experience pushed him to audition for a community theater play himself, and he took his first role in The King and I shortly after, staying involved with local productions throughout high school.

However, when the time came to investigate colleges, the pressure to major in a more conventional field pushed him to consider other options. While he’d initially been intrigued by IC’s acting program, he ultimately decided against it. Instead, he entered college as an exploratory student, then settled on a psychology major by his sophomore year. He explained that the reasons that led him to take an interest in psychology were similar to the reasons he’d found his passion in acting.

“The study of psychology is really the study of individual differences and how people vary from one scenario to the next, from one person to the next. And those differences between people fascinated me, and I really wanted to know more about that, and then also, to understand how people interact with one another rather than just within themselves,” Dambroff said.

At the same time, he realized that while adjusting to college life freshman year, his artistic pursuits had become less of a priority. By sophomore year, however, he found a new creative outlet when he took up a capella singing with IC Voicestream. He also found a way to fit acting into his busy schedule, and found time to enroll in both Acting I and Acting II with Professor Barbara Anger of the Department of Theatre Arts. Anger noted his talent immediately, but says she saw a dramatic change in his level of involvement between his time in Acting I and Acting II.

“I could see a talent before, but now I could see he had kind of more of a passion or a committment to it [in Acting II]. He worked harder with it, and he went deeper into the character. It’s interesting, because he’s kind of a very sweet guy, but he’s also willing to take risks. There’s a certain honesty which he uses in his work. And it’s really good in terms of film work, because he’s kind of low key,” Anger said.

While Dambroff further developed his talent for acting and recalls the classes as a great experience, at the time, his major in psychology remained a priority. Anger believes this field of study may have complemented his acting ability by giving him a unique angle on performance.

“There’s so many things that you have to understand about a script, what’s the subtext, what’s the undertone of something, how the characters operate, what kind of actions they take to get what they want,” Anger said. “If you get that psychological understanding, then you can play something in a more realistic way instead of just trying to act. And we’re always trying to get students not to act, but to be in that moment. So if you have the understanding of it, then you’re not putting it on, you’re living through it.”

Others were quick to see a similar connection. Dambroff first broke the news to his mother while volunteering at a luncheon at her office, and was pleasantly surprised by both his parents’ immediate acceptance of his new path.

“My parents were very supportive. My dad being a creative type himself, really, was supportive, and my mom was supportive — all around everyone said, ‘you know, you should follow your dreams.’”

Still, no amount of support could smooth out some of the challenges that came along with such an abrupt change to an artistic path. For example, rather than applying his degree, Dambroff’s first job out of college was at a local Panera Bread near his hometown in Westchester County [“I’m not entirely thrilled about that,” he joked], then becoming a waiter at a local restaurant in order to save up extra money. All the while, he was investigating the reputations of acting programs in New York City. Eventually he auditioned for and was accepted by the three-month Conservatory Program at the T. Shriver Studio, where he found a community of aspiring actors and actresses. The combination of his confidence in his decision and the camaraderie he’d found at the studio helped support him through the unsure times he faced.

“It was pretty overwhelming. I mean, I was certain that my mind was made up, but it’s a transition like anything. [But] when you surround yourself in a studio in a supportive environment, it makes it easier to allow yourself to fail artistically, because you have that safety net. Once I finished [the conservatory program] I was like, I think I can do this, I think I have a good shot at this,” Dambroff said.

He was right to think so. A few days after his New Haven audition, Dambroff received a phone call with the best possible news: he’d gotten the part. It would be his first feature film, and he would be the lead. A rush of relief and happiness came over him, and with it, recognition of the work that lay ahead.

The film was shot in Connecticut in 2011 with a process far different from the stage acting Dambroff had grown up with, 12-hour days on set, and a majority of that time being spent just setting up the shots. Those rigorous days of filming all paid off when Brilliant Mistakes made its premier at the Rhode Island International Film Festival in August 2012, then later appeared in the Toronto Independent Film Festival. The film was officially released on April 9, and recently received a worldwide distribution deal.

Seeing the film’s success has been a surreal experience for Dambroff, and one that reaffirms his decision to take a risk and jump into professional acting. Still, now that his first feature film is behind him, he’s back to working a day job doing administrative work at a financial firm as he looks for his next role. It’s an unpredictable lifestyle, but he looks forward to the adventure.

“I want to continue to work in independent film a little bit and try to build myself that way in hope that I can get some parts in big-budgeted feature films. And then ultimately, hopefully create somewhat of a name for myself so I can get involved in theater in NY again. That’s my ideal picture,” Dambroff said.

Karen Muller is a junior IMC major who also has hopes to end up on IMDB after graduation. Email her at kmuller1[at]thaca.edu.