Four score and seven months ago, moviegoers stood proud in their jorts and cheered ‘Murca!’ as they watched an epic battle for justice unfold in Timur Bekmambetov’s Abraham Lincoln: Vampire Hunter. Based on Seth Grahame-Smith’s comic novel, the film grabs patriotism by the cojones as the 16th president goes all Buffy on a confederate vampire army.

Now, Steven Spielberg’s Lincoln is a historical depiction of a president just trying to get a bill passed. Beneath its modest features, this film exceeds the common representation of fruitless American politics. With a Golden Globe-winning performance by Daniel-Day Lewis, Lincoln breathes life into our brittle history books.

Two films, two stories, one beard. Given the straight-forward nature of the storylines, both of these movies seem to transcend the bounds of genre identification (perhaps visually-striking optimistic biography? Or Histafantactiondromedy?). Based on the title alone, I expected Abraham Lincoln: Vampire Hunter to contain the saturated absurdity on par with The Room, Titanic 2 or Cool as Ice (starring Vanilla Ice caught in a “West Side Story”-esque feud with his star-crossed lover).  The seemingly accurate nature of the costumes, setting and vernacular gave the film a jarring seriousness. Following our president’s righteous Kung-Fu training montage as a young grasshopper, adult Abe’s strife with presidency seemed almost historically accurate.

But the moment young Abe revealed to Mary Todd on a picnic, “I cannot tell a lie; I hunt vampires,” you had to wonder how serious the movie was supposed to be taken.

Conversely, Lincoln crammed a myriad of emotional sub-plots into its congressional plotline. The stone-faced Thaddeus Stevens, played Tommy Lee-Jones gave a tremendous performance fighting for the Emancipation Proclamation’s pass. His fervent struggle to prohibit slavery stems from a heart-warming secret revealed in the denouement.  Sally Field’s unfiltered emotional honesty as she dealt with the death of her son added powerful depth to the spectrum of her own strength as well as her husband’s.

Though also quick-witted, Mary Elizabeth Winstead’s portrayal of Mary Todd was sweet, but forgettable. If only they had given the gentle flower a pair of nunchucks…

It is a marvel that Daniel Day-Lewis has become our leading portrayer of antiquated Americans. The same man that played Hawkeye (Last of the Mohicans), Bill the Butcher (Gangs of New York) and Daniel Plainview (There Will Be Blood) has once again brought their faint memory and mysticism to life. Day-Lewis’ even-tempered severity gave Lincoln a sage-like heir. His initially tangential anecdotes punctuated themselves with the wise pithiness of a Chinese proverb. 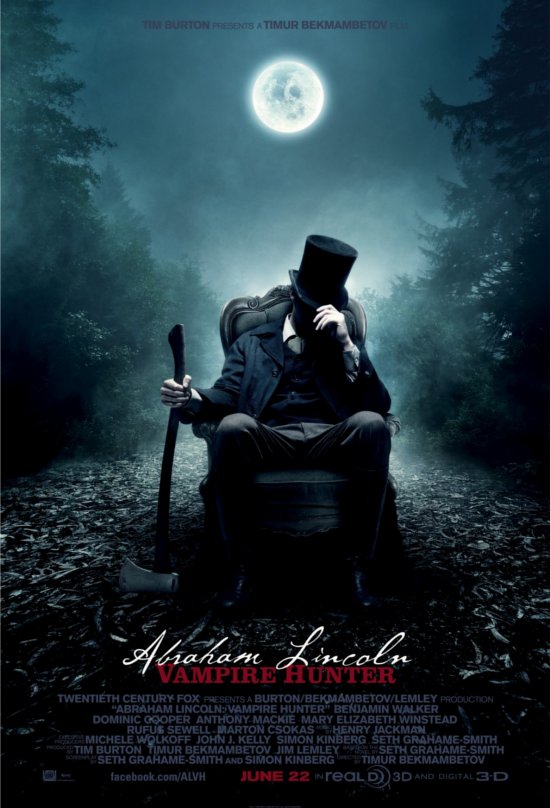 Benjamin Walker was not so cool, calm and collected in his portrayal. Opening with an infant Abe witnessing the murder of his mother, he swears vengeance, and some years later is lucky to be getting drunk standing at a bar next to Henry Sturgess (Dominic Cooper). The fervency for justice carried through in Abraham Lincoln: Vampire Hunter, as well as Lincoln’s thoughtful consideration, but this Lincoln battles the dehumanized enemies of war with an axe to grind. Rather than passing a bill to end slavery, Lincoln and his supporters charge into battle like gangbusters and split heads like rail-tracks. Given the illogical (but awesome) circumstances of the plot, Walker’s performance is earnest and sincere. Even Rufus Sewell’s portrayal of Adam, the leader of the Vampire Nation, spits and snarls only every now and then.

All while battling atop a speeding locomotive that is bolting towards a blazing wooden bridge. Preposterous, yet exciting; somehow Walker and his co-stars deemed convincing in the goofiness of the plotline. Abraham Lincoln: Vampire Hunter holds no historical weight. One blink and you could miss the detail revealing Harriet Tubman’s Underground Railroad winning the war for the North.

So which film was better? Comparing the essence of these movies is like comparing Jack Daniels bacon donuts with your Grandmother’s finest Christmas ham; both infinitely decadent and rife with patriotism, yet satisfy completely different cravings. Both of these cinematic adventures will change your perceptions of Abraham Lincoln, and reignite the dwindling love for the most kick-ass president in the history of the United States. America! Fuck Yeah!