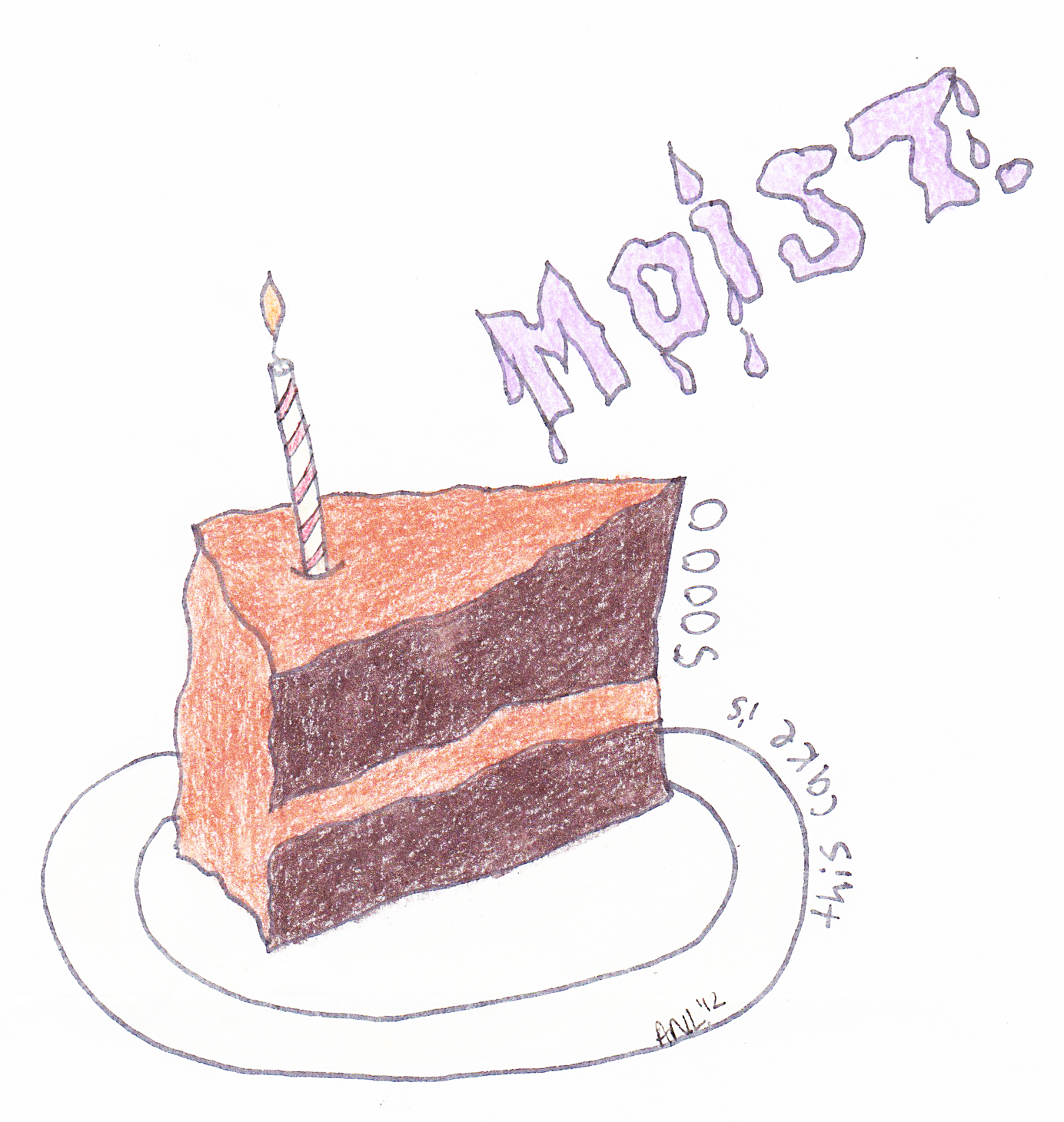 How a Deliciously Moist Cake Ruined My Relationship

Why is everyone so offended by the word moist?  It is just a synonym for damp or wet.  What is the big deal with that little five-letter word?

My interest in the concept of moistness began three weeks ago at my girlfriend Mandy’s twentieth birthday party. We had bought her a three-layer cake with pudding, fudge, chocolate chips and frosting in the middle and topped with sugary writing. We were all chatting and having a great time when I opened my big mouth and said, “Mmmm! This cake is so moist!”

Mandy’s eyes grew wide.  She screamed and her eyes rolled back in her head.  Before anyone could react, she fainted right in the middle of that perfect three-layer cake. When she awoke a few minutes later, she screamed to at me to get out of her life until I gained some “human decency and sensitivity.”

According to our mutual friends, my now ex-girlfriend still gets nauseous whenever she sees baked goods.

In order to get my mind off the fact that my ex blocked me on Facebook, I decided to give myself a mission: a moist mission.  I wanted desperately to know why people hate the word “moist” so much.

I started by asking a girl from one of Mandy’s classes, Ally O’Doyle, whether she hated the word “moist.” She responded promptly by kicking me in the shin. Unfortunately for my shin, many of my other interviews went the same way.

Finally, I got a revealing answer from classmate Kaylee Saltsman.

“That word gives me shivers every time I hear it,” Saltsman said. “If that word was a person it would be the equivalent of a creepy guy stroking the back of your neck in a subway.”

“The word just sounds too moist,” said Mark Woodell, my roommate. “I mean listen to it. Moooiiiissst,” According to Woodell, it’s not just a word that makes girls squeamish.

I needed a more unbiased source. I needed someone to agree with me about how foolish it is to dislike a word based on its tonal qualities and definition.

According to a professor of linguistics at New State University, Emily Strout, “Certain words have a displeasing sound to the ear.  The hatred of words like “moist” or, dare I say, “panties,” is considered by many to by a natural evolutionary trait. The fact that you don’t cringe when you hear words like those makes me question whether you are actually human.”
I’m done with this.  There is nothing wrong with the word moist. The word is nothing more than a clever synonym for damp, clammy, drippy, drizzly or oozing.

…Oh wow. Ew. I think I get it now. Just reading that last sentence makes me want to throw up.  I think I’m going to just crawl under my nice dry covers and wait for the nausea to pass.

Jennifer Pike is a sophomore writing major who cringes at the word “flesh.” Email her at jpike1[at]ithaca[dot]edu