Home IssuesFancy Lifestyles of the Rich, Famous and Young
FancyMinistry of Cool

Lifestyles of the Rich, Famous and Young 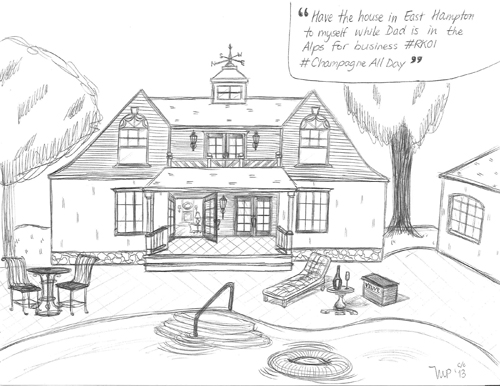 A look at how the privileged are portrayed

Instead of attending depressing school mixers like the standard high school freshman, I was curled up on the couch, entranced by faux Manhattan socialites. It was the perfect escape for an awkward pubescent Jersey girl; I could experience a fabulous city life without having to get in a car and drive a half hour.

Plus, I could eat carbs while doing it. I was living the American dream.

As a junior in college, I have yet to escape the grasp of trashy television. My knowledge of Kardashian facts is remarkable and my ability to recite Real Housewives catchphrases borders on pathetic. However, I have accepted  that these shows are not actual reflections of upscale urban life, but dramatic representations for entertainment purposes—or so I thought.

Gavin Samples, a 17 year old from Crespi Carmelite High School in Calabasas, Calif., leads a life that many reality-obsessed individuals such as myself would consider undeniably fabulous. However, when questioned about his famous neighbors, he responds with a nonchalant coolness.

“The Calabasas Commons usually has celebrities walking around,” he said. “Justin Bieber goes there sometimes, but they are just normal people. I’m friends with Kendall and Kylie Jenner. I don’t really consider them famous.”

While a Jenner sister sighting would put me into anaphylactic shock, Samples is relaxed regarding such celeb spottings. He explained that life as a Calabasas teen may seem unbelievable, but to him this lifestyle is completely normal.

“I hang out with friends a lot, go to the movies,” Samples said. “I can surf in the mornings before school which is awesome. For me, it’s just normal life and what I am used to.”

However, not all upscale city folk believe that the highlife is everyday life. Harrison Asen, Ithaca College junior and native to Manhattan’s Upper East Side, said he believes that such stereotypes are entirely circumstantial.

“It’s more of a situational and personal thing than something that can be applied to so many people,” he said.

When questioned about the stereotypes created through shows such as Gossip Girl, Asen was immediately outraged. He finds shows like Gossip Girl to be offensive to the majority of New York City kids.

“Gossip Girl is a piece of garbage,” Asen said. “Sure, there are really rich, snobby kids at these private schools, but everything is exaggerated. Some kids are loaded, some aren’t. Gossip Girl chooses to portray those who are loaded and make that into a stereotype.”

Additionally, Asen was appalled by the ways in which Gossip Girl portrays partying in private high schools.

“Most kids I knew that drank in high school would drink in houses and not go out to clubs,” he said. “Gossip Girl creates such a warped image of the party scene.”

Asen also noted while fast-paced urban life can force children to mature faster, but not necessarily in a negative way.

“I think in some ways growing up in Manhattan can make people grow up faster,” Asen said. “For me, I became more independent.”

Perhaps everyday life in an upscale metropolis is not directly correlated with drama and celebrity. However, it never hurt anyone to live vicariously through the fabulously fictitious characters seen on television.

Upon asking Samples if his life mirrors that of California-based reality shows, he replied with a familiar casualness.

Then again, why watch those shows when real life is so much cooler?

Francesca Toscano is a junior IMC major who was once on Toddlers & Tiaras — you may know her as Honey Boo-Boo Child. Email her at ftoscan1@ithaca.edu.