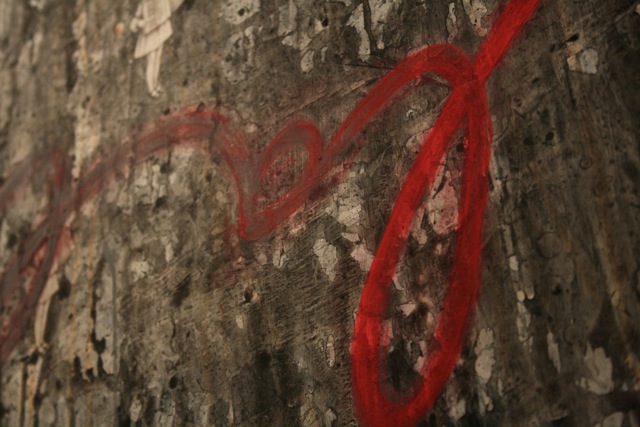 The first things you will see when you walk into Ithaca College’s Handwerker Gallery now through October 14 are huge pieces of artwork hanging on almost every wall. Most artists featured in this gallery display somewhere between thirty and sixty pieces, however the current exhibition “re(Collection): memory and narrative in recent work” by Patricia Bellen-Gillen features only twelve of her works. Filling the walls, these pieces are visually complex and layered. Seeming simplistic at first glance, these pieces are generally muted or monochromatic in color. If a piece does indeed feature a color, it is a singular, vibrant shade making the artwork pop from the wall: a splash of pink, chartreuse green, or pumpkin orange.

The eclectic collection pulls you through with repetitive themes, which wind their way through the entire exhibit. Color too creates a path, fading from intense brights to a stark black and white with only touches of red and orange scattered throughout. The collection draws from deep within, causing the viewer to puzzle not only the meaning behind the artwork, but also pull on thoughts of nostalgia in juxtaposition with futuristic themes. 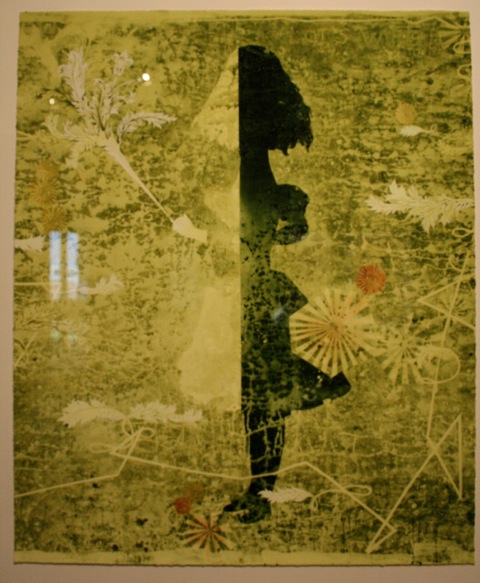 The initial piece I was drawn to upon entering was a work entitled “Saint Francis/Saint Francis (Sea Change) (2011),” a dramatic canvas splashed entirely in a bright lime green with a mirror image of two scuba divers reaching for each other, their calves fading into bare, white-washed human feet. An orange fox snarls from the left side of the canvas. I found the mix of plant, humanity, and fox jumbled with the underwater, old-time divers exotic and immediately pushing the viewer into the world of the exhibit. It’s a topsy-turvy universe of darker fantasy, and this piece in particular presents a kind of dream-like world. The raw, exposed feet of the divers, a pool of contrasting white underneath their soles, makes the viewer ask him or herself where these divers are, what their purpose is, and how they exist, as well as if we, the viewer, exist in the same way. Bringing together water, color, nature, humanity and collage, it’s a striking piece. It draws you back to the connections between humans, animals, and nature, washed in something of an unappealing color, pushing you to consider the opposites in our world: beautiful versus ugly, color versus monochrome, protection versus vulnerability.

Walking through the exhibit you notice reoccurring mythical and fantasy themes all making numerous appearances: jack-o-lanterns, flowers with smiling centers, little pigtailed girls holding accordions. “Beautiful Stories/Alice as Lot’s Wife 2 (2012)” displays Lewis Carroll’s Alice as the biblical character of Lot’s Wife, who disobeys an angel’s warning and therefore turns into a pillar of salt. The piece pops with layers of greens, and twines a silhouetted girl surrounded by plants, leaves, and flowering geometric figures in a dream-like contrast. All of Patricia Bellan-Gillen’s pieces share a similar style of layering that makes them visually as well as mentally engaging: stacks upon stacks of graphite, collage, print, and paint. 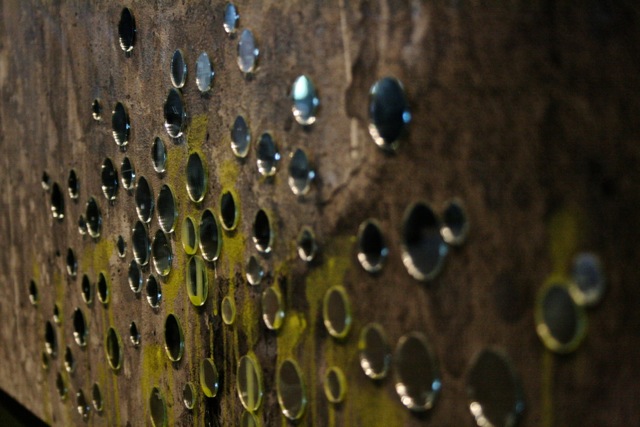 Pressing further into the exhibit, the tones of the pieces slowly become more and more monochromatic. Another of my favorite pieces is “Iceberg/The Island of Ineffectual Voices (2012),” another full-wall piece, which features three men on a hill and an “island” of many printed images of girls playing the accordion. The bottom of the piece is dotted with tiny circles of mirror dripping with chartreuse paint and on the ground a spray-painted island speckled with more reflective glass. The three men crouched over a small hill echoed with control for me, ringing with themes of Big Brother: they seem like the villains, making multiple appearances in not only this piece but in “Iceberg/Lost Voices II (2012)” as well. They are physically larger than the girls, and seem to have their own, powerful, sleek wickedness in their stances. The piece causes the viewer to reflect on themselves in physical reflection of his or her values, thoughts, and actions, as well as in comparison to isolation, colors, and speech. What do we, as humans, see in ourselves and what do our thoughts say about us? This piece caused me to consider my relationships, how expressing ourselves affects everyone around us, through any sort of form: artistic, vocal, intellectual. Are we isolated by our ideas, or are we drawn towards others who are similar to and have thoughts as we do?

Two of her most prominent and powerful pieces, are “Loudspeakers/Undertow (2012)” and “Iceberg/Lost Voices II (2012),” causing the viewer to question the power of language, voice and expression of thoughts. The theme of censorship versus free expression of speech runs very true though these two pieces. “Iceberg/Lost Voices II (2012)” is a smaller work but is still visually complex. It features many little girls with gashes of red across their mouths, forcing the viewer to ponder the power of speech and thoughts. It caused me to ponder the question of censorship, a very complex issue in today’s age: are we censored, and if so, by what? Or whom? We can observe from history, and we would all agree intellectually, that censorship is an undesirable thing. But do we currently think in these terms; do we censor ourselves? Do we censor each other? The most important thought that came to mind was do we really live in a free press – does free speech actually exist, or are we forced to conform to society’s standards of what is deemed “appropriate”? “Loudspeakers/Undertow (2012)” is a beautiful standalone piece, seeming uniform in its geometric shapes but reveals splashes of acrylic and collage the closer you look. The splashes of red and purple ‘la la la’s in the piece contrast with the black and white shapes, and begs the viewer to question what it is actually being said. It asks about the power of words in our current society and culture: do we carefully choose what we speak, or have we been trained, through 140-character bits, to simply blurt out whatever comes to mind – “blah, la, blah, la, la”? 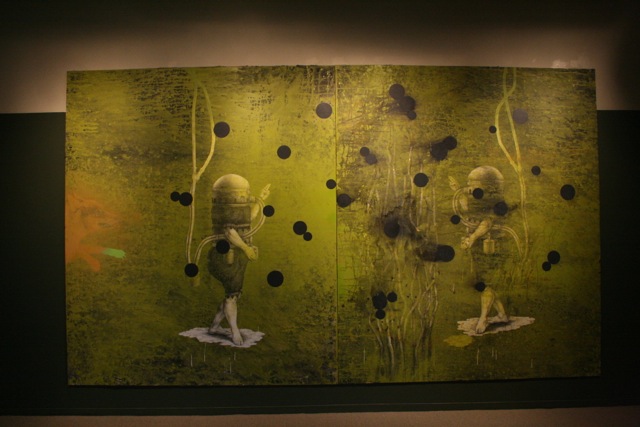 Overall, the exhibit is interesting, unique and thoughtful. It brings up questions of humanity in a creative and mythical way. It’s like walking through some sort of twisted fairy tale as you wander through the exhibit, but it’s a wonderful stop on cool fall day where you can wander and ponder about the deeper meaning of past, present and future. As the artist notes in her statement, she achieves a puzzling “weird elegance” that is well worth seeing.