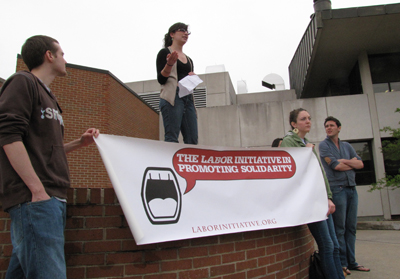 A determined group of students gathered at Free Speech Rock on May 1st, and prepared to start discussion of recent changes at Ithaca College. The Labor Initiative in Promoting Solidarity (LIPS) organized to protest and gather signatures for a petition to deliver to President Rochon. The petition listed three demands: equal pay and equal benefits for part-time professors, that the financial burden of equal wages not be passed onto students through tuition increases, and a greater voice for students in the budget process, including a democratically elected student trustee. LIPS began working on these issues this year and stated that they will continue next Fall.

The United States hasn’t celebrated International Worker’s Day quite like it did this May Day. The LIPS protest aligned with protests and rallies across the country in the path of the Occupy Movement in efforts to bring attention to improving worker’s rights and benefits and restructuring the nation’s economy. As Laura St. John, LIPS member, explained that LIPS’s protest wasn’t just about Ithaca College’s situation, it is about a national problem. Private institutions all over the country are making changes in order to increase enrollment and in many cases students are shouldering the financial burdens. It’s just one of the ways colleges are functioning more and more like businesses.

Because part-time professors are paid by the course and not allowed to teach more than two courses a semester, they are subsequently not eligible for benefits. This lack of health care and increased fear over job security makes adjunct professors’ work more stressful and can even strain inter-department relations. Politics professor and chair Chip Gagnon was at the event to support LIPS and shared his opinions as a former part-time professor. 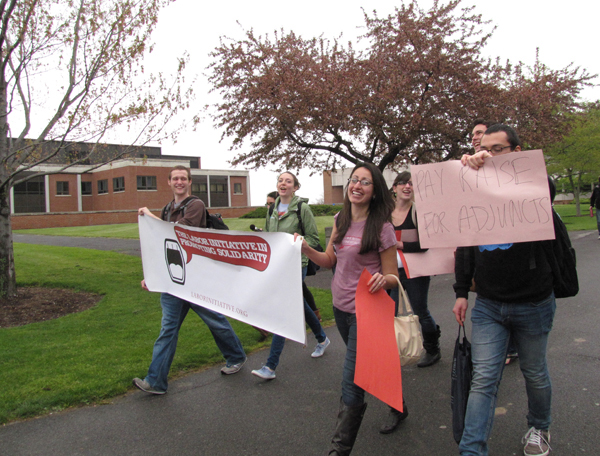 “A 10 percent raise, 3 percent or 5 percent raise, that’s not acceptable. They should be getting at least $5,000 per course,” Gagnon said.  “Ideally people would be hired full-time and would [be] eligible for benefits. When you’re thinking about what kinds of demands to make… for the adjunct faculty it’s important to push for something that’s more than just a few percent… and also try to move away from relying on so many part-time people.”

Gagnon also went on to say that his own department has not been listened to by the administration and stressed the importance for groups like LIPS to put pressure on the college.

“We calculated that a class of 17 students, which is an average-sized class at Ithaca College, contribute collectively $60,000 per course that they take. Whereas adjunct professors are paid $3,900 for that class. So there’s a huge discrepancy between the two numbers. We’re already paying enough. Where’s the money going to?” St. John said.

Politics professor Zillah Eisenstein was also at the event to support LIPS and speak out about the issue both politically, and as a professor that thinks about her students’ futures.

“On some level I’d say the amount of unemployment in our country? Undoable. The amount of debt that my beloved students are in? Undoable. Heartbreaking. At some point, you say no. Enough,” Eisenstein said.

Students at the event on May Day said “enough” and took their petition to President Rochon’s office to hand deliver it and discuss the document. Unfortunately Rochon was unavailable at the time to participate in a discussion with LIPS. Rochon’s secretary accepted the petition on his behalf and LIPS hopes that its demands will soon all be met.