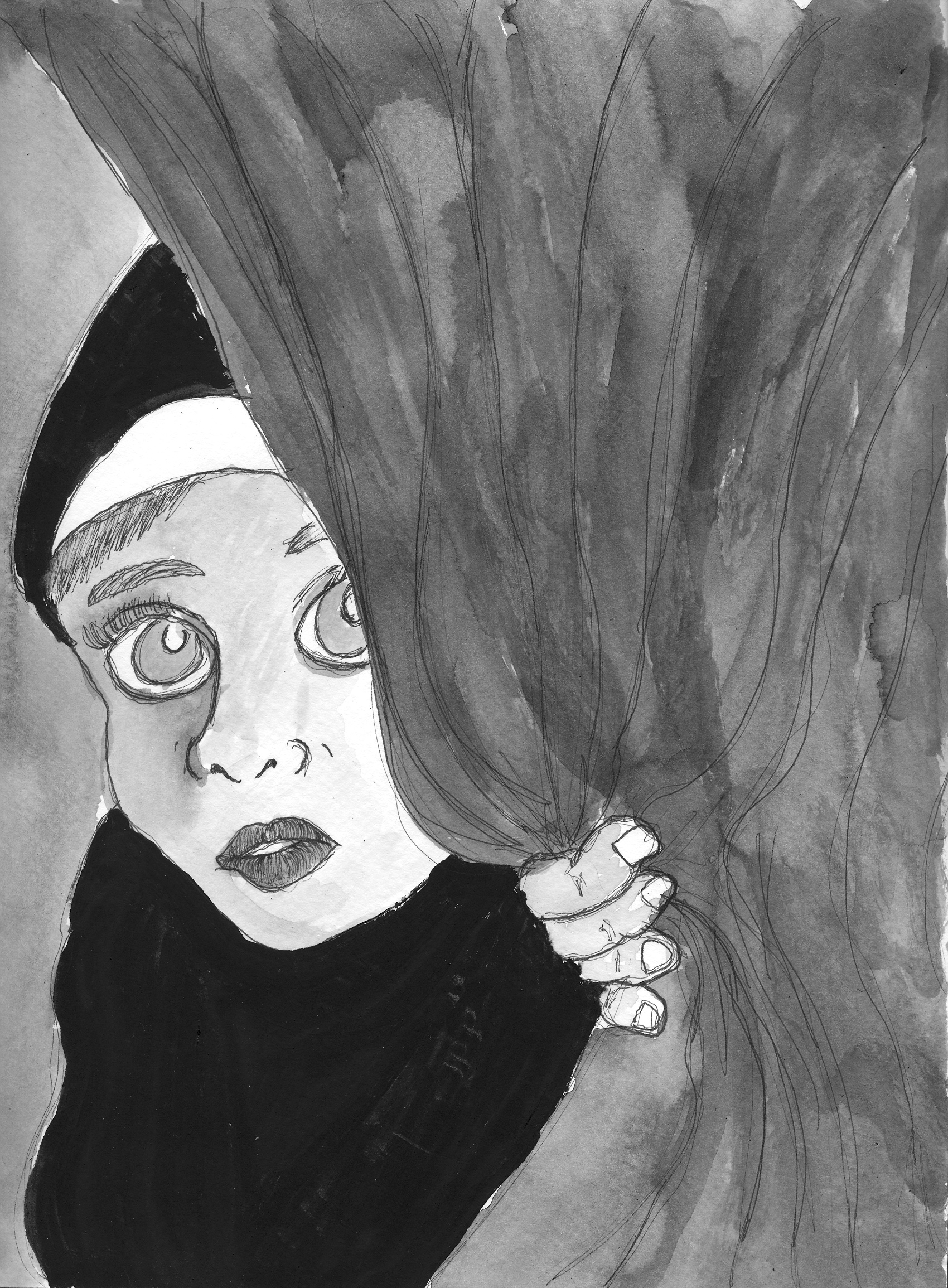 She closed the book, placed it on the table, and finally decided to walk through the door. It was built with three cracking wood beams and mounted on a step of concrete blocks. The prayers hissed out between her puckered lips as she clung to each of their words, relying on their power to change the fate of what lay beyond the rosewood barricade.

For days the four walls of the mosque had shaken, rumbling with the anxiety provoking weight of an alarm clock that never goes off at the right time. She had sat, blanketed only by her own arms, and the knowledge that someday, somehow, it would stop. She had memorized each prayer, each song, each chant and had wrapped herself in them until she felt nearly invisible enough to escape.

Her parents had taken her and her little sister to the mosque the day that their neighbors’ house had been bombed by a stray home-made grenade. They held her in their arms so tightly that she thought she was going to pass out. She knew enough not to protest, but the grip of her mother’s arms around her small frame frightened her. It scared her more than the screaming children and the flaming bodies. Those people hadn’t touched her, they hadn’t wrapped themselves around her and squeezed. They hadn’t taken her wrist and led her to her room, where she had to pack her backpack full of food, water, and her worn-out Qur’an.

She overheard her mother and father speaking in hushed tones outside of her door. They whispered with such intent that she knew they were formulating a plan about something. The door slammed in a blur of confusion and panic behind them. They were no longer home. They were heading into an empty, haunted mist.

The streets were deserted. Cold, silent bodies hid behind each door, but the alleys were occupied only by the dust that mourns bombs. She closed her eyes and followed her arm, which was being pulled along by her mother’s sweaty grip. She played the game that her mother had taught her whenever the kids at school started to pick on her. She closed her eyes, breathed in the scent of a cool beach breeze, and imagined that she was in a world where the sand was bordered by oceans, instead of more sand. She clung on to that image for as long as she could, until she heard the weeping at her side.

Her little sister, only six-years-old, hid behind a black curtain that revealed only her innocent, terrified big brown eyes. They looked up at her with a pleading so desperate, that all she could do to stop from tearing up herself was look away. She pulled her sister in to her side and didn’t close her eyes again. As they rounded the corner at the end of the street, her father breathed out a Shukran, and she saw the tinged white dome of the mosque come into view.

The silence of the place made it seem unreal, like it was taken from a movie set. The only stirring creature was an old man with a long gray beard on his knees in the center of the circular room. He was monotonously bowing, touching his forehead gently to the floor and then raising his body up to reveal the zabiba in between his bushy eyebrows. He made no noise, but she could see his lips moving in the familiar shapes of prayer. This repetitious man and the cloud of surrealism that he cultivated made her feel safe. She knew the mosque well; she had studied in its corners for years. She had memorized her small, torn Qur’an while sitting on the soft woven mats. This was a place for Allah. This was a place for love.

Love alone does not always shield the people you care for though. It did not take long for the knocks to come, loud and hard. They had just finished a small meal of fruit when the pounding began. Her father pushed her and her sister in the direction of the bathrooms. She instantly grabbed for her sister’s hand, but felt it slip out just as she ran into the first stall and huddled up on top of the toilet seat. She rocked back and forth, like the man who still bobbed his head in the middle of the prayer room. When the door smashed open she pressed her hands over her ears, leaving them dampened but vulnerable. She heard a man’s voice, unfamiliar and aged, yell something inaudible and then explode in a chilling bang.

She began to hum, still rocking in her arms. She sang the lullabies of her youth, a youth that seemed to have vanished in an instant. She clung to the lilting words as if off in a distant land. From what seemed like a world away she heard the muffled shrieks of a woman’s voice. Her mother cried out her name “Fida’, Fida’, Fida’.” But she was so far away. All there was were the songs in her head and the warm, rocking of her body. There was a loud crash that sounded like the splitting of a wooden chair, followed by a powerful cry that can only be born from young, healthy lungs; and then nothing.

She sat, perched on the toilet lid, until the sun rose and peaked its dreary eyes through the small bathroom window. She began to twitch as the light hit her eyes. She slid down off of the lid so that she could pee into the toilet. Fida’ slowly unlatched the lock on the door and opened it just enough to fit one eye. What she saw paralyzed her: pieces of splintered wood strewn on the floor, almost blanketing the old bearded man and his grave of dried blood. She vomited onto the floor outside of the bathroom. Once her body had finished retching she slowly opened the door enough to squeeze out. She picked up a woven mat on her way to the body. Fida’ then began to lay the mat over the dead man’s face and upper body, which contained the wound, and say a funeral prayer in the strongest voice she could manage without gasping in disgust.

The stink of the bearded man kept her from eating any of the food they had packed. Instead she knelt, bowed and recited, silently, the text of her holy Qur’an. The words did not register in her mind. What soothed her was the bowing, the reassurance, every time, that the floor would be there. That it would be hard and cold, and that she wouldn’t fall through it as her forehead touched the ground.

She sat for three sunrises and three sunsets. No more people entered the mosque. She was alone. The only noises she heard were the passing of cars, tanks, motorcycles, and rowdy foreigners joking in English. They seemed so happy, so full of life. She wondered if they were children too. She wondered if any of them would knock on the door and check if she was okay.

But then, at daybreak of the fourth day of solitude, she heard it; a soft, weak knock at the door. She shuffled over to it on her knees and pushed her ear to the crack between the door and its frame. She heard nothing other than the bustle of foot traffic and the crush of tanks demolishing the earth beneath them. She knocked back on the door and heard a small whimper in response. She knocked again, and was interrupted by a piercing cry shadowed by a crackle of small stones against the door. Then the noise was engulfed by a sound so large it erased all human senses. She finally heard silence, she finally heard nothing. She finally closed her book of prayers, breathed in her strength and her courage. She breathed in her faith and her love, put the book on the table, and opened the door.

Letters to a Recluse Playwright