IC Student Groups Bring Water to the Forefront by WICB 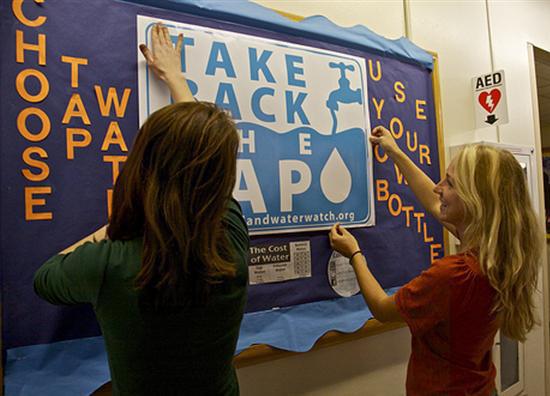 Every 20 seconds, a child dies from a water related illness. 884 million people lack access to clean water; that is almost three times the United States population, according to Water.org. Water scarcity affects more than forty percent of people in every continent. By 2025 there will be 1.8 billion people living in regions with absolute water scarcity, according to UNWater.org.

In 1992, the United Nations established World Water Day to celebrate the importance of fresh water; and in March 22, 1993 it was celebrated for the first time.

Today, it has grown to a truly international festival with thousands of events worldwide.

Ithaca College student groups like Take Back the Tap and Food for Thought brought water issues to the forefront during what they dubbed “Water Week.”

Mara Alper, professor of communications and adviser to Take Back the Tap, said it is critical for students to be aware of water conservation issues because water is a finite resource.

“People need to understand that water, although we’ve taken it for granted, we can’t take it for granted anymore,” Alper said. “We need to be conscious of it. Buying bottled water doesn’t support good use of water.”

Take Back the Tap set up demonstrations throughout the week around campus in partnership with other organizations like Resource and Environmental Management Program (REMP), Cans for a Cause, Frack Off and the community-based Level Green Institute to raise awareness.

The week’s events included water tasting challenges, water pong games, and culminated with the screening of Flow, a documentary about how water is exploited by bottled water corporations in developing countries.

Junior Jessica Wilhelm, president of Take Back the Tap, said students can do their part by boycotting bottled water.

“Investing in a reusable water bottle is not only good for the environment, but it will save you a lot of money,” Wilhelm said.

Junior Stephanie Lavallato is the treasurer of Food For Thought, an organization dedicated to making natural resources more accessible to children around the world. Food for Thought decided to join the efforts to raise awareness about water scarcity by setting up demonstrations around campus. They held an event called Water Works and partnered with Ithaca elementary schools and the Uganda-based non-profit organization Freedom and Creation to use art as means to reach out to the community.

“Water issues are a huge deal and we tend to not think about where our water comes from,” Lavallato said. “Every drop does count. We consume hundreds more per day than the average family in Africa.”

Alper encourages the community to appreciate our abundance of fresh drinking water.

“It’s about not taking water for granted, especially here in the Northeast where it’s very abundant and completely taken for granted.”