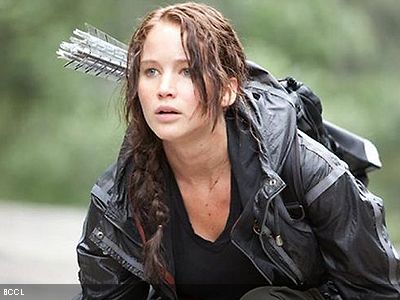 Jennifer Lawrence stars as Katniss Everdeen in 'The Hunger Games'

Whenever an award-winning book series is turned into film, there is always the question of whether it will live up to the book. In the case of Suzanne Collins’ The Hunger Games, the movie both captures the essence of the text and succeeds as a blockbuster film.

Set in a dystopian future, the storyline is constructed like Orson Scott Card’s book Ender’s Game and Kinji Fukasaku’s film Battle Royale. The Hunger Games revolves around a place called Panem with 12 Districts that serve the Capitol, a glitzy metropolis under the reign of sadistic President Snow. As punishment for a past rebellion, each District must send one boy and one girl, chosen by lottery, to fight to the death in a televised arena.

Academy-award nominated actress Jennifer Lawrence plays lead character Katniss Everdeen, a 16-year-old hunter who has provided for her mother and younger sister since her father died in a coal mining accident; when her sister Primrose is chosen as a tribute for the annual Hunger Games, Katniss volunteers in her place. In Gary Ross’ adaptation, Lawrence perfects Katniss’s strength and beauty and (according to Hollywood.com) even mastered the art of archery for the performance.

The rest of the cast did a superb job – Josh Hutcherson played Peeta Mellark, the humble baker’s son turned clever tribute of District 12. As Katniss’s love interest, Hutcherson showed off Peeta’s vulnerable side with depth. Also, Elizabeth Banks was genius in her take as the girly and heartless Effie Trinket,  Stanley Tucci was hilarious as eccentric TV host Caesar Flickerman, and Woody Harrelson was amusing as the drunkard mentor Haymitch.

Definite changes were made in the transfer from the book to screen. One example is that in the text, the mayor’s daughter (of District 12) gives Katniss the mockingjay pin which defines her rebellion whereas in the film Katniss chooses the pin for her sister. But these changes generally worked in making the story fit into the time frame of a film, especially for audience members that haven’t read the book.

There were minor problems with the movie – editing of the film appeared choppy and jarring in a sort of Cloverfield-esque way (handheld camera work), which didn’t always work, especially when shooting the glamorous Capitol. Overall the cinematography could have used improvement – although the technical elements were aptly covered, the overall look tended to be bland.

Suspenseful, tear-jerking, and yet badass at the same time, the film expresses the rebelliousness of the story while at the same time intriguing audiences of all kinds with a dramatic love story and a fight for survival in the face of imminent death.