Home IssuesCharity How Moral Are Your Fibers?
CharityMinistry of Cool

How Moral Are Your Fibers? 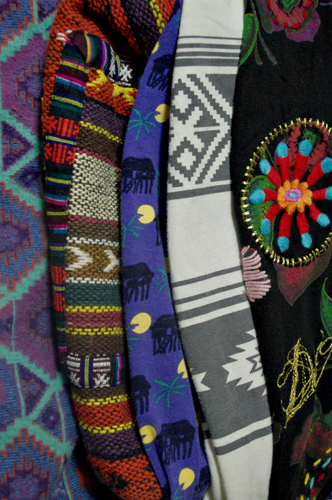 So let’s get one thing clear: Moral Fibers is not a charity. This company is not to be confused with the likes of Toms Shoes. It’s great that Toms gives shoes to kids in Africa but what do these kids do after the shoes wear out? Although they have a nice new pair of shoes, they still live in poverty and those shoes don’t provide their next meal.

Moral Fibers takes on a new form of giving to those in need, something they like to call ‘‘charitable employment’’ and ‘‘supporting human capital.’’ As the old saying goes, if you give a man a fish, he will eat for a day. Teach him to fish, he will eat for a lifetime. Moral Fibers teaches poverty-stricken Haitians the craft of making unique clothing.

According to founder Martin Weiss, he and Co-founder Matt Brightman wanted to make Moral Fibers a more direct and tangible form of assistance than donations for Haitians. They wanted to have a substantial impact on people so that they could come back and see how lives are being positively changed. Weiss was familiar with other ‘ethical clothing companies’ but critical of companies like Toms that provide aid.

“You can donate a million pairs of shoes and a million kids end up with an extra pair of shoes, but that’s not really international development, that’s aid,” Weiss said.

Giving aid is great, but it has the tendency to create dependency. Moral Fibers stresses the idea of international development, which allows communities like the disaster- stricken Haiti to rebuild their community with a strong foundation for the future.

A group of 15 artists are commissioned to create 12 unique pieces of art each month. They are provided with the supplies, and in return receive a salary that is equivalent of four times the nation’s salary. In return, the artists must donate time serving their community and attend at least one educational program. If one of their paintings is used in a design, the artist receives 15 percent of the revenue from each shirt sold.

Artists also receive Social Security and medical benefits, as well as a benefit of their choosing. These have ranged from education for a family member, a housing stipend or an entrepreneurship option, which provides startup capital for local small businesses. The goal of this project, according to the Moral Fibers mission statement, is not for a few Haitians to get rich from their art, but rather to provide them the opportunity to support themselves and rebuild their community.

You might be thinking, ‘Cool, another group of charity freaks trying to push their ultra expensive product so we can ‘rebuild’ Haiti.’ Shirts based on the artists’ work range from $40 to $50, which is a bit on the pricey side. The cool part of this company is that you can follow the artist that designed your shirt. You can see how they are doing and what they have achieved since becoming an employee of Moral Fibers. You can directly see how each artist is progressing. One artist was just able to save up enough money to move his family out of a tent and into a real apartment. Pictures and updates of this artist, Victor Phalange, were posted on the Moral Fibers blog and Facebook page.

Weiss and Brightman are both college students who juggle attending classes at McGill University in Montreal and running Moral Fibers. Weiss says that it isn’t easy but he is so passionate about his work with Moral Fibers that all the hard work is worth it.

Moral Fibers is looking to release their new line sometime this spring. This will include clothing other than the shirts designed by artists in Haiti. The line will include blouses, dresses and accessories. The company is looking to start selling at retail stores, but their business model won’t turn retail. Going to bigger stores will create a higher demand for their product and the artist will end up making more. Right now they are lined up to launch Moral Fibers at six or seven boutiques in Montreal and Toronto, and are making plans for retail acquisition. Weiss says that although they are focusing mainly on retail in Canada, they are going start talking to U.S. boutiques soon.

Moral Fibers is not the only company that is providing ‘‘charitable employment.’’ Pura Vida is a company that employs artisans in Costa Rica to make bracelets that range from five to ten dollars.

The next time you want to feel socially responsible, do some research into the company you’re sending your money to. It’s your call to support human capital, but supporting international development and getting a cool T-shirt isn’t the worst thing you could do for charity.

Brittany Romano is a sophomore journalism and sports media major who wants you to shop responsibly. Email her at bromano1[at]ithaca.edu.