My Week with the (Model) European Union 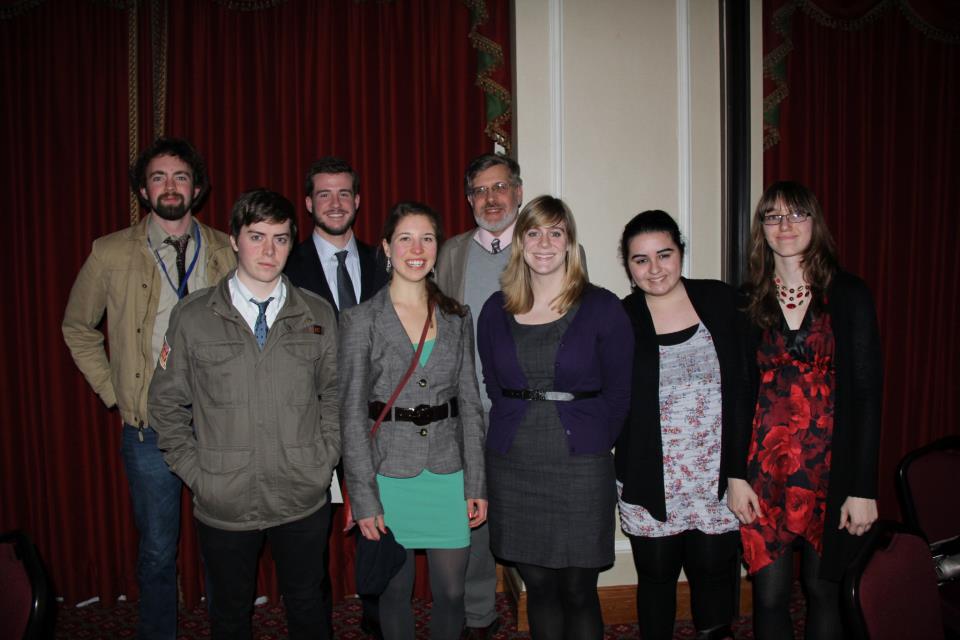 Cheers, from jolly old England! Earl Grey, British hospitality, and rollicking politicking constituted the experience of a group of Ithaca College’s European politics students this past winter break. Five passionate undergraduates ventured across the pond in early January to the University of Exeter for Model European Union (MEU), a close cousin of IC’s thriving Model United Nations (MUN). Politics professor Juan Arroyo organized the adventure as a simulation of the European Council summit so students might engage the EU policymaking machine in all of its complexity and often idiosyncrasy.

The actual experience of being in a room full of HOGS (Heads of Government or State) for 6 hours a day revealed the nitty-gritty of European Council, and by analogy, of policy making processes in general. Demurely diplomatic and traditionally democratic members often are not.

In final negotiations, foreign affairs ministers used a spin-off on the strategy of wining and dining, promising the only dissenting delegate two pints of Strongbow cidre if he would concede to their proposal. This ‘leverage by beverage’ lobbying strategy effectively swayed the delegate, though he continuously reminds me that he has yet to see a drop of the promise that won his vote.

The MEU conference was for all an unforgettable week of what can only be called the gauntlet of European policymaking and ultimate praxis in politics.

Ithaca College representation of Italy in the summit was a unique challenge, given the technocratic capo di stato [head of state] Mario Monti. After a full spread breakfast at the Jury’s Inn a few blocks away from the high gothic splendor that is Exeter Cathedral, the meetings and press conferences commenced in earnest. In the HOGS meeting, Monti, represented by Shaun Nisani, a sophomore Psychology major, Italy’s notorious economic woes favor a strengthening of the Euro. Rule by the people and national sovereignty were touchy subjects because of the debate surrounding the perceived threat of Italy’s recently installed technocratic government. An air of seriousness was tempered only by serious proposals to get a pint by the older members of the delegations when tempers flared.

Late on the second day, Hungary submitted a proposal that recommended that economically volatile countries who repeatedly fail to meet economic standards or who violate sanction agreements be taken out of the Eurozone. Such an exit clause would be for extreme cases only, and would involve 20 year probation.

Hungary’s argument that by “cutting the ties that weaken the European zone” the EU would be stronger and less vulnerable to the volatility of fiscally weak or irresponsible countries was shot down by the other leaders. This near unanimity sent a symbolic message which suggests that the HOGS acknowledge an EU whose identity is not based solely on economic strength. The delegates indicated with their vote an understanding of the subtler pillars of EU identity such as a common history, culture, and vision for the future.

Ultimately, the trip hammered home the fact that classroom material is not limited to a mental sphere of theory and ‘ivory tower’ ideas–mundane everyday activities are tied up in policymaking The mental abstraction of HOGS in a room making decisions that impact the Eurozone, neighbors, and world is concretized upon entering the delegation room. Once you shake the delegates’ hands, experience their snappiness when they get hungry (“I make a motion to get lunch!” Thank you, Czech Republic. We were all in favor.), and endure lobbying off-duty (via Facebook, with a mouthful of sticky toffee pudding, riding the hotel elevator), you get a feeling for the job of a delegate. They are always on-the-job. They are utterly human, in the paradox of weakness for Cider and idealist strivings for the best policy. Such a simulation brings you many degrees closer to the reality of politics in the flesh, and edges you that much further from apathy.

The two-hour train ride of political debate, cockney accents, and views of sunny sheep pastures from southern England concluded our MEU exchange experience. The Ithaca students stayed in London for the week, and returned with nutella, great stories, and a fading tan from the glow of student representatives who are doubtlessly tomorrow’s political activists.

Four of IC’s students look forward to the next conference, which will be held in NYC next January. International student representatives continue to post on the SUNY MEU Facebook page about the experience. Check out the posts and live feed on twitter and here at the official MEU News Corps blog. And if you see the Czech Republic, please, urge them to pay their Cidre debts, or we will no longer trust their ‘persuasion-on-tap’ pledges. Cheerio, then, and we’ll see you in NYC!