An Update on Buffalo Street Books 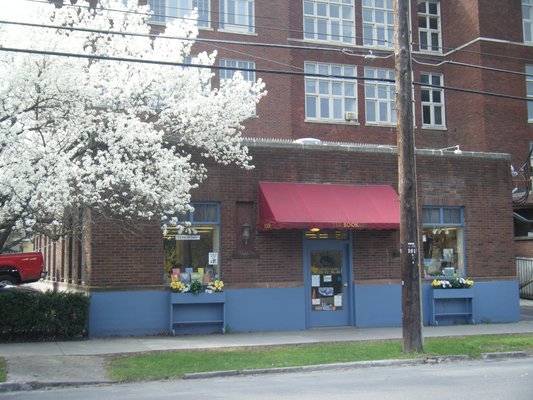 It’s not an easy place to find.

When I’ve talked to Ithaca College students about the Dewitt Mall, only few of them understand what I’m talking about. They give a surprised “OH!” when I say “it’s that place where Moosewood is.” If they don’t know where the Dewitt Mall is based off of that, I tell them that the Dewitt Mall is past the Starbucks next to the Commons. And then I’m lectured about Starbucks’ terrible business practices.

No matter how you find the Dewitt Mall, you can’t deny that it contains some of the coolest stores in Ithaca. Granted, most students on campus are familiar with Moosewood and Green Star (yes, there’s one there too), but the entire Ithaca community is familiar with the bookstore that lies in the back of the mall, Buffalo Street Books.

Buffalo Street Books originally opened in 1981 by Jack Goldman as the Bookery II. Goldman transferred ownership of the store to Gary Weissbrot in 2006 and later renamed the store Buffalo Street Books in 2009. As an independent bookstore, the retail location features a wide selection of merchandise, expanding from books and periodicals to include an extensive selection of musical CDs (including local musicians) and classic cinema DVDs.

So here’s the underlying question: why the hell was BSB able to do what so many stores couldn’t? Local businesses aren’t exactly the most long lasting, and bookstores are evaporating as you read this. (Borders, anyone?) But against all odds, Buffalo Street Books is still here, but the question still remains; why?

I’m not going to tell you that I have a solid answer to this question. I don’t. But I think the answer doesn’t lie with the store itself — it lies with the people that run and own it. The owners and employees of Buffalo Street Books do so much to make the store more than just a store; they’ve turned BSB into a community within a community. The store holds lectures, writer’s workshops, and reading groups on a regular basis. The store reaches out to Cornell and IC professors and works with them to supply books for their classes. The store encourages burgeoning writers and invites them to share their work. People who go to Buffalo Street Books aren’t just customers or employees, they’re members of BSB’s community.

BSB would not be around if it wasn’t for the six hundred plus people who bought shares of the bookstores, but that’s not due to charity; charity has nothing to do with it. Charity didn’t earn BSB the title of Downtown Retailer of the Year from the Downtown Ithaca Alliance, nor did it make the extensive list of upcoming events. The people associated with the store are the reason the store has, does, and will continue to succeed. Together, these people have created a welcoming environment that is not only an extension of their kindness, its what makes BSB a special place to be.

I won’t lie, I’m totally biased. I’ve volunteered at the store for close to a year and I absolutely love it. Any time I don’t feel like being on campus I can hike downtown and sprawl across a couch in the reading room, listen to music, and enjoy a nice cup of coffee. (For the record, the couches are some of the coziest I’ve ever sat on.) Sure, it’s a store, but it’s also a place where I can go relax, not feel judged, and take the time to pick up a good book. It’s a place where you can walk inside and immediately feel like a member of the community.

In case you’ve missed the entire point of this piece, Buffalo Street Books isn’t just a bookstore. Whether a customer, employee, or volunteer, everybody who is at BSB wants to be there. I can’t tell you how many blossoming friendships and reconciliations I’ve witnessed during my shifts. I’ve sat through fantastical readings and read the most amazing books and have met some of the most amazing people through my experiences. Buffalo Street Books might not be the easiest place to find, but it’s definitely one worth looking for.