Home Buzz Blog We Can Tremble Together
Buzz BlogIthacaNews & Views

We Can Tremble Together 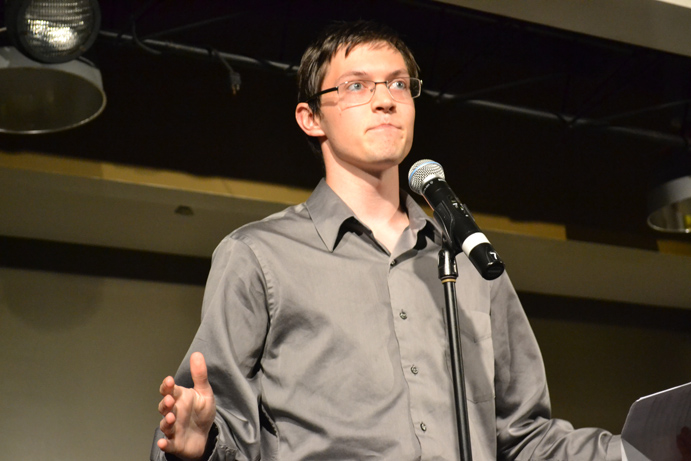 Editors’ Note:This is the full text of a speech delivered at “Occupy the Mic,” a speak-out organized by the Labor Initiative in Promoting Solidarity at Ithaca College on Nov. 15, 2011.

Why are we here at the pub tonight, occupying the mic? Are we angry? Are we frustrated? Scared? Overwhelmed? Do we feel alone? All of the above? None of the above? Or maybe we don’t know exactly why we’re here — sure, we can list some good reasons for coming, but maybe we really came because something about this event just seemed right.

Right now, I think that this is where the Occupy movement is: As critics of the movement have said repeatedly, it doesn’t have leaders, it doesn’t have a clear vision—it doesn’t know itself yet. But this might be how change happens. Perhaps change begins not with leaders but with the unhappy grumbles of groups of people; not with clear but with hazy vision, hazy on account of our emotions, hazy on account of the tears in our eyes; and perhaps change begins not when we already know ourselves, but when we are ready to accept that we have yet to find ourselves. Perhaps something just feels right, and then we fill in the rest later.

On the one hand, we don’t yet have a common vocabulary, a common understanding; we can’t really be sure that we even have the same feeling. On the other hand, here we all are. Perhaps we do.

We’re told again and again that our personal problems are just our own personal problems — especially when it comes to student debt. Do you want economic security, economic independence — you know, a house, food, a little bit on the side for a little bit of leisure? Help yourself, get an internship. Get good grades. Pick a business oriented major. It’s quite a faux pas to make these kinds of issues political anymore.

The Occupy movement has changed this. But we should not underestimate the difficult labor involved in going from the emptiness of a negative reaction to the fullness of possibilities we can work to realize, from being a group that has come together because it feels right to a group that’s ready to seize the moment and effect change. The danger is that we go from this feeling – which is first and foremost personal, each of ours individually — to grand statements that summarize how all of us feel — without actually talking about how all of us feel.

The danger is that we start using the word “we” in slogans – “we want freedom,” “we want equality,” “we want more for the 99%” – without having done the work to create this “we.” Because the truth is, we have spent so much of our lives treating so many of our problems as personal, as our own; we have been told for so long that we should be ashamed to talk about our economic troubles, that the myth that we are all alone with our problems has become something of a reality. Occupy the Mic is about breaking down that myth and the reality based on it.

There is an element of Occupy the Mic that is cathartic — many of our speakers will probably end their speeches feeling relieved, having finally gotten something off their chests. But Occupy the Mic is not essentially about catharsis. Nor is Occupy the Mic essentially about finding victims of the problems surrounding student debt. While we may learn more about these problems and their victims, it would be disrespectful to treat any of our speakers merely as embodiments of a trend.

Rather than all of this, Occupy the Mic is about the construction of universality; it is about building a “we.” And while slogans and principles have their place in every movement, they do not suffice for this purpose. If I say “we” and mean some indeterminate, cloudy thing, something “out there” that guarantees that I speak for more than just myself, then I misuse the word. A true “we,” a true universality, is not an abstract theological notion. It is me and her and her and him and him and him and her and so on and so on — it is all of us together as individuals.

As tonight’s speakers share their stories, I hope we listen. And I hope that we hear not the voices of victims worthy of our pity but allies in a common struggle. And then, I hope we think. If we do all of this, I believe we will have done something to move from the emptiness of our negative reactions toward the fullness of possibility implicit in them.

Before the thought of possibility — the difficulties it entails along with the promises it makes – we should tremble. And speaking of the difficulties: we know the police brutality, and we know about the eviction of our comrades in New York City — and we have trembled. But we can tremble together.