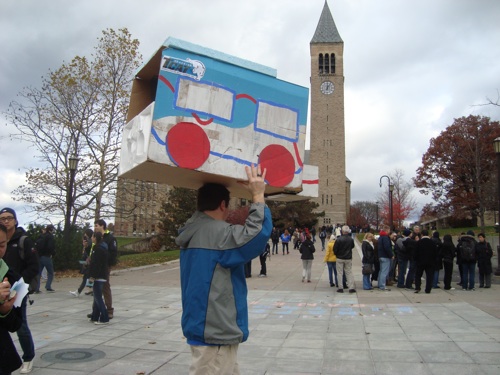 On Friday, Nov. 11 at noon, students from the Cornell Organization for Labor Action gathered on Ho Plaza to raise awareness, through petitioning and educating, about the TCAT workers’ fight for a fair contract. The TCAT workers’ contract expired this year on Sept. 11; their new proposed contract would fail to provide the workers with wage increases for the next two years, while their health care costs are predicted to rise 3-5 percent. They are also asking for compensation for the hours they spend in TCAT terminals waiting for drivers or increased traffic. The United Auto Workers’ union 2300 has been working with TCAT since the workers voted down a proposed contract on Sept. 25.

The City of Ithaca, Tompkins County and Cornell University fund TCAT. As funding has decreased from New York State and the City and County continue to face financial deficits, COLA members, as well as others in the community, have been looking to Cornell, with its huge endowment, to cough up some money in order to relieve the financial burden placed on the TCAT workers.

“Our TCAT bus drivers are the people that get us to class each day,” said Molly Beckhardt, president of COLA. “We really rely on them heavily. It’s a great public transit system, but nobody wants to pay for it.”

Beckhardt said COLA wants Cornell to become part of the conversation and sit at the bargaining table with TCAT management. She hopes this congregation will raise more awareness about the TCAT workers’ struggle.

“People I’ve been talking to seem actually really interested in it,” she said. “Everyone rides the TCAT, so they all know this is something that affects them. I think that drives it home with people.”

Some believe TCAT workers are also trying to raise awareness on their own. Early yesterday morning, 20 bus operators called in sick, causing the suspension of several routes. UAW claimed they did not organize the action.

COLA plans to deliver their petitions to Cornell President David Skorton and eventually schedule a meeting with him. COLA will be speaking out about the TCAT contract at the next Common Council Meeting on Wed. Dec. 7, at 6 P.M. at City Hall.