A Different Perspective on TOMS Shoes 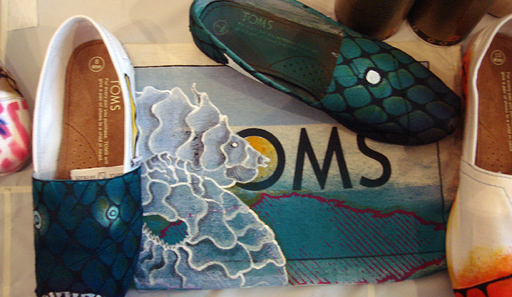 Alright, TOMS shoes are the ultimate hipster cliché. We all know that – and we’ve seen significant discussion of that in a blog post yesterday by Topher Hendricks. I personally don’t own TOMS, but I know a few people who do. They’re worn by the people who believe they’ve done good in the world, usually while donning mass manufactured clothes crafted by child slave labor in Indonesia. The hipster irony…I get that.

But call me crazy in my assertion that TOMS actually is doing good in the world.

TOMS is a “for-profit” company, as are all companies that aren’t non-profit companies or charities. Yes, for each pair of shoes they make, TOMS earns a marginal profit. But that’s how capitalism works – that’s the foundation of the global economy. In order for an idea to thrive, spread, and grow, a company needs revenue.

I’d hardly call “One-for-One” one of the most clever marketing tools of all time. I’d be more apt to call it the truth. TOMS really does donate one pair of shoes for every pair of shoes purchased. People are eager to contribute to the goal, and with good reason. The children in Africa are grateful for the shoes. I’d safely assume that they don’t care about our bullshit philosophical debate about whether or not “for-profit” companies should run a profit. They don’t have shoes. TOMS is helping to solve that.

A real crime would be if TOMS was a charity that lied about its profits. Or, moreover, if TOMS was like one of the many companies out there that falsely claim to do good with their fortune while exploiting laborers worldwide (hey, Nike.) It’s these organizations we should be attacking – not TOMS.

Sure, donating shoes isn’t a long-term solution to the poverty, famine, war, rape, corruption, and bureaucracy that plague Africa. But I sure as hell wouldn’t suggest the alternative to be for TOMS to allow African citizens manufacture and sell the shoes locally. Those who have studied globalization and corporate activities in Africa know that such a business tactic generally only worsens the already dire conditions there: laborers are exploited for low wages, families are stripped of their culture as they become driven by greed and U.S. dollars, and the already-bureaucratic systems there become more top-heavy. It’s one thing to “teach a man to fish.” It’s another to install your own fishery on his land. (Note: TOMS factories operate out of China, Ethiopia, and Argentina, and to this date, they employ fair working conditions.)

Does Blake Mycoskie, founder and CEO of TOMS, own a yacht? Perhaps, but if so, he’s one of the few yacht-owners who are actually trying to change the world. I believe that society’s energy and resources should be aimed towards unraveling actual charades, and not merely attacking companies based on confused and misdirected anti-capitalistic rage. TOMS shoes may not be a revolution. But they may enable the people whose feet they clothe to start one of their own.

I might go buy a pair of TOMS, and I think I’ll keep the label on.