Occupy Rochester: The Day After the Arrests

I very briefly visited Washington Square Park in Rochester on the day after the arrests of 32 protesters who refused to leave the park after the 11:00 pm curfew. A release on the Occupy Rochester website had called for a rally in defense of free speech at 6:30 pm.

When I was there at approximately 5 pm, there were only about 10 people, but according to the Facebook group, there were about 45 people by about 8 pm.
I first spoke with Mike Doody, who came in support from Manchester, NY. He said he came out to show his support at Rochester, about a 40 minute drive away, because he projects that a larger crowd that a city is capable of producing might draw more attention than groups of only a few people gathering in small towns.
He took the time to talk to me about what attracted him to the Occupy movement, noting that the movement is not about people complaining that they do not make enough money, a myth that he feels media coverage promotes, but about grievances with the way the political system works.

Similar to others I have spoken to, he cited his main grievance to be a situation where corporations are given the same rights as people, and his main focus to be the “elimination of corporate personhood.”

Most of the issues people are concerned with, whether it is the financial situation, the wealth disparity, or genetically modified foods, Doody said, can all be drawn back to corporations having the same rights as individuals, such as through campaign donations and the help of mainstream media influencing elections. In effect, policies are created for the interests of corporations instead of the people voting, he said, calling this system “undemocratic.”

As well as oil companies and financial institutions, he also cited Monsanto as an offender. 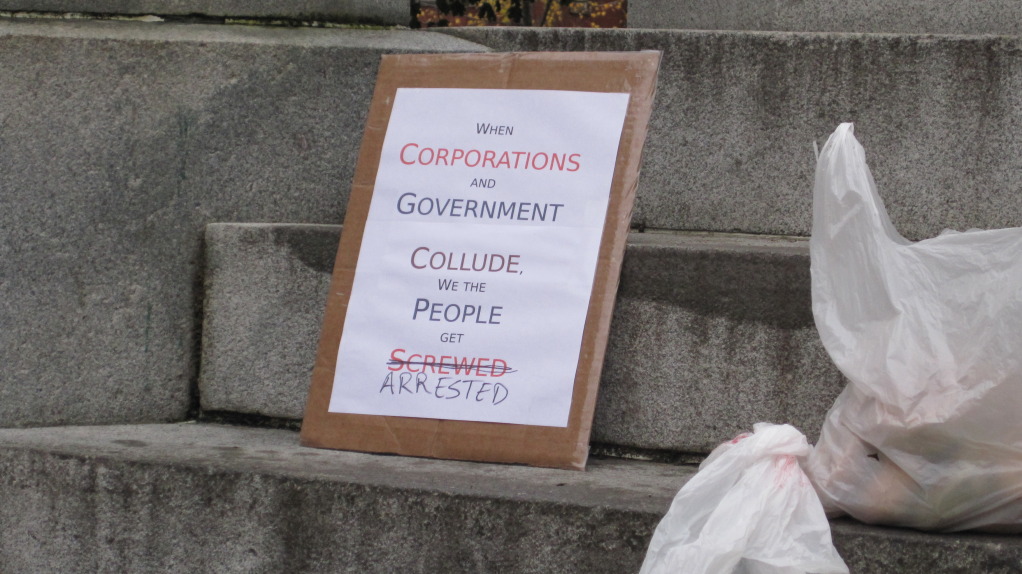 I asked a protester who identified himself as Danny, of Rochester, why they decided to actually occupy Rochester, instead of only holding general assemblies and regular protests, such as in Ithaca. He said it is because Rochester is the location of several corporate headquarters.

I also talked to one of the dubbed “police liasons” who interacted with the police during the arrests Friday night. He identified himself as John, of Rochester, and noted that he is “not here for the cause,” but “here for the safety of the people.”
He stood on the sidewalk outside of the park while the arrests were taking place, relaying messages between the protesters and the police after protesters refused to leave the park after the 11 pm curfew.

John noted that most people don’t understand that the police officers would likely join the protests if they could.

He said he told the police that while he himself was not refusing their request to exit the park, he would not leave the area until either the law enforcement left, or everyone was arrested. He noted that one girl, who had been in the park with her sleeping bag, was arrested after the police told the media teams that they could leave and that the arrests were complete.

People returned to the park that morning at 5 am, John said. By 9 am, he knew of 23 of those arrested who had been bailed out.