Listen While You Work: Homework Albums

My classes are not your classes, but that doesn’t mean you can’t apply the vibes I create while I do my Sex & Love assignments to your Academic Writing homework time, for example.

If none of these albums enhance your coursework completion experience you can always default to The Lord of the Rings’ soundtrack. Though I haven’t opened myself to that kind of divinity in an academic context yet, I have heard it can really enhance the essay-writing process.

While I was reading about Descended Like Vultures for this feature I realized my iTunes copy is missing “10:1,” the song that puzzled Brian Howe six years ago when he reviewed the album for Pitchfork.* He calls the track a “red herring,” seemingly unsure of how to make sense of its placement on the album.

“10:1” does pop more than the others but it works, especially beside literary characters experiencing mental deterioration (the focus of American Breakdown). If you’re finishing your project for a class like this, don’t surround yourself with anything too dark. A measure of distance when dealing with the clinically insane isn’t the worst idea.

None of the songs are too sunny or too dark, but the brighter ones (“Bird on a Wire,” “Publish My Love”) are provocative enough not to seem out of place playing over an assignment on Poe or Plath.

The melancholier songs (“California,” “Love’s Lost Guarantee”) maintain a degree of mellowness that round out drier readings by old-timers like R. D. Laing and Freud.

*He gave it a 7.8, meaning it’s not exactly hall-of-fame status, but it’s not Weezer either. I don’t understand how people can have the TV on just “in the background.” This might mean I have an information-processing problem: I can’t totally absorb course readings if I’m half-listening to an episode of Curb (which deserves my full attention anyway).

If you follow that logic (and subscribe to the belief that music consumption is best approached as an independent activity) you might not want to listen to really excellent albums while you do your homework.

I love Rilo Kiley (RIP)—I love it so hard that not only do I hold the band to a higher standard, I acknowledge this was not a great album. That means I like it better when the majority of my attention is focused elsewhere. (I just need a hint of Blake and Jenny to get through my Personal Health textbook.)

One of the reasons I love RK so much is also a reason I enrolled in Personal Health—I am full of feelings. In this class we learn about stress and time management, family health histories and the advantages or disadvantages of having certain personality types—basically, the class is all about ME. Rilo Kiley gets that.

Because “Playground Love” was featured so prominently in The Virgin Suicides (note the presence of another Air song in that video—“Ce Matin La”) it’s difficult for me to separate my opinions on Air and my opinions on Sofia Coppola.

Looking at her body of work, it appears Coppola is concerned with love, femininity and the repression and release of those conditions. Air occupies that same space in my head, the crucial difference being the greater depth of their explorations.

“Cherry Blossom Girl,” “Mike Mills” and “Run” similarly deepen my reading of texts pertaining to the intersections between biology (evolution and neurochemical processes) and spirit (love as an individual experience). 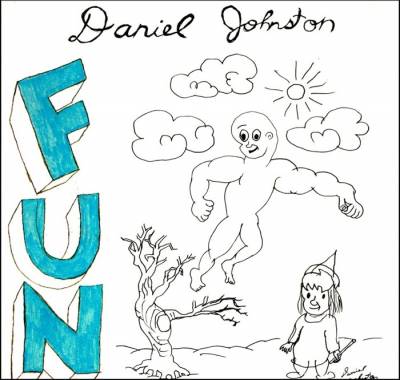 First of all, if you haven’t seen The Devil and Daniel Johnston yet make time this weekend—I’m giving you an assignment. If your school library doesn’t own a copy (they do) your public library probably has one available.

Talk about a personal narrative—this guy was an obsessive artist in high school, making videos, sculptures (medium: junk), playing guitar and constantly recording his parents, friends, and himself on audio cassettes. These obsessions culminated in a move to Austin, Texas after college, where he attained folk hero status. He went on to work with some of the most popular bands in the 90s (The Velvet Underground, Butthole Surfers, Yo La Tengo), even developing a friendship with the members of Sonic Youth.

Besides being the subject of a popular documentary, Johnston is known as the designer behind Kurt Cobain’s “Hi, How Are You?” t-shirt.

In Story (my class) we are required keep a notebook full of doodles, collages, our ideas and reactions to the things we read/hear/see—records of our media consumption and how those media influence our perception of the world.

Johnston might be haunted but he manages to explore the make-up of his interior (and more importantly: communicate that state of mind to a general audience) in a compelling way—something I try to keep in mind when I examine my media intake (an analysis central to this course).

Our professor gave us a strategy—the most compelling characters appear to contradict themselves: a boxer with low self-esteem, depressed comedians, dorky rockstars (see: This is Spinal Tap), meaning everything we write should represent either familiar figures in unfamiliar spaces or familiar worlds populated by unfamiliar beings.

According to the band (quoted in a post on popular mp3 blog yvynyl) they “resample a smattering of pop songs, twisting them into unrecognizable sludge, and sing collaged lyrics from Top 40 hits over them. [They’re] just trying to feed pop music back to the consumers in the most subversive way possible.”

Man-Cat gets me pumped, something I need while I write (it’s too easy for self-doubt to creep in when you’re as inexperienced as me). But more importantly than that their EP is free—and legal—on the Man-Cat Bandcamp page.

Which albums and musicians enhance your academic performance the most?

Are there any classes (Organic Chemistry, Web Development, Archery) you’d like me to match to a playlist?

Do you think Sofia’s work is leagues deeper than Air’s (rather than the other way around)?

Let me know in the comments.