The Taboos of Terrorism

Censorship in the media after 9/11 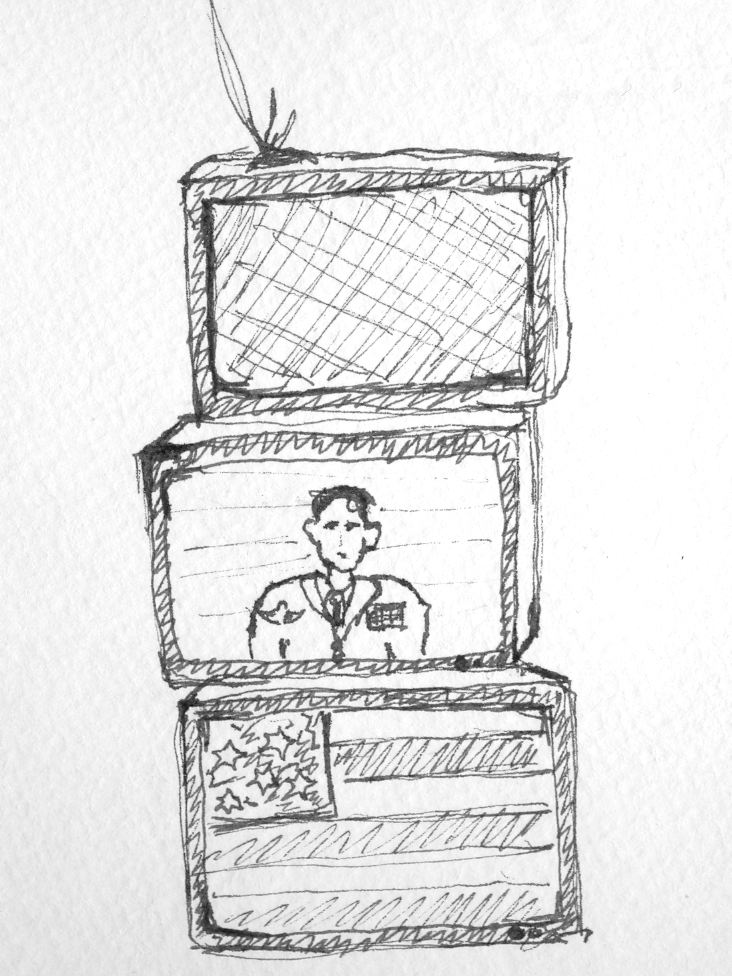 “Where were you when the world stopped turning on that September day?”

The lyrics of Alan Jackson’s iconic 9/11 tribute still ring out in the hearts and minds of America, just as Walter Cronkite’s voice still resonates with those who tuned in when he proclaimed that President John F. Kennedy was dead. Ten years after the sunny autumn day when the Twin Towers fell, there are many thoughts still going through the minds of any American. We are reminded of the attacks every day when we turn on our TVs and radios, read the news or just walk through New York City and pass Ground Zero. That day will always remain in our thoughts.

In the years since 9/11, Americans have been exposed to images that bring strong emotions associated with the attacks. The media has been successful in grabbing our attention and making us evaluate what are the most pressing issues of our time.  Sure, there will always be economic issues and pop culture scandals, but the one thing that seems to stick out in everybody’s mind is this continuous war on terror.

Terrorism is everywhere.  It is domestic and abroad, it is at the workplace and in public, but most of all, it is in the media.  The media has changed drastically in the years since Sept. 11, 2001, not just in the news, but on television, in film and in music as well.

Think back to Alan Jackson’s lyrics, “Where were you?”

Younger generations may remember the attacks vaguely, as an incident that maybe had us staying inside for recess and being picked up from school early.

These generations did not know enough about “national tragedies” and hijacking planes to realize that there was a state of emergency across America. We were unable to comprehend the changes surrounding our entire lives, much less so in the media. Apart from the continuous reports of post-9/11 shock, some of the changes were all too subtle to be noticed by the younger generations.

CBS affiliate and media analyst Glenn Halbrooks explained that in the time after 9/11, politicians and newscasters began wearing flag pins.

At first, they were seen as a unifying symbol that America could stand strong. However, what was going on behind those red, white and blue ceramics was a censorship that would last several years. There was control of what you could say on TV and who could say it.

After 9/11, Clear Channel, the largest radio conglomerate in the U.S., released a list to radio stations of songs that they deemed as inappropriate given the circumstances.

The song that stood out on this list the most was John Lennon’s song “Imagine.” A song universally recognized for it’s message of peace and unity amongst all men was banned from the radio. It became clear that the agenda was not to ban songs that would be deemed insensitive or inappropriate, but to create a political censorship against those who opposed war.

At the same time, an event was occurring that is rarely talked about in the world of mainstream media. FAIR founder and Park Center for Independent Media director Jeff Cohen explained that in the year and a half after 9/11, TV networks had lobbyists putting pressure on the FCC to alter ownership rules so that their conglomerates could get even bigger.

This would imply that the multinationals behind stations would expand so that the topics and issues would stay in line with what the Bush administration set forward. No one wanted to offend the White House, so therefore what would seem to most to be a fair debate would be seen as bias against Bush. As a result, for every personality who was anti-war, there had to be two that supported the ideas of war and offensive military tactics.

As a result of the dispute among those who wished the media to remain unbiased and those out to keep in line with what the FCC set forth, nationwide termination took place. MSNBS’s most viewed talk show, The Phil Donahue Show was under heavy fire for Donahue’s views and overall questioning of the system, and was eventually cancelled just three weeks before the invasion of Iraq.

Jesse Ventura, a known conspiracy theorist, author of the book Don’t Start A Revolution Without Me, and the man scheduled to take Donahue’s time slot, was suddenly stripped of his show as well for his views involving several conspiracy theories. Now, that is where he lives in the television world, on TruTV’s Conspiracy Theory with Jesse Ventura. It’s believed that all of these steps were taken to ensure America’s backing of the invasion of Iraq.

As Cohen explained, the propaganda was a tactic used to convince America that going to war was the clear and rational option.

“The invasion of Iraq could not have happened based on false pretenses … if not for the intimidation in the media,” he said, explaining that those little American flag pins had turned into a symbol for President Bush.

A Step in the Wrong Direction

It seemed as though freedom of expression now had strict limitations, and freedom of speech was diminished as well. No one could speak against the government, and there was a strict and unspoken “patriotic code of conduct” that seemed to overtake the entertainment industry. Halbrooks recalled the television station he worked for at the time, and the memo about not accepting any suspicions packages.

Halbrooks claimed that over time, because of the false threats, Muslims began to be stereotyped, “despite the news stories produced about Islam in general, what a mosque looks like and reports on all the Muslims who aren’t terrorists.”

Over time, the nation began to cool down and started searching for outlets to cope with this diminished national unity. So, naturally, the hype of 9/11 transitioned from the news to the commercial venue of crime television and Hollywood.

Ratings for the show 24 hit then-all time highs in its fifth and sixth seasons, with the latter’s plot centered on Muslim terrorist threats. What’s worse is that the line between Middle Eastern cultures was blurred into one large mass of discrimination. The film 300 attracted controversy over the way it portrayed Persians as barbaric, yet did extremely well at the box office.

More films began to be made on the topic of terrorism, and what once was a touchy subject seemed to be taking a turn towards entertainment, just as the film adaptation of the Pearl Harbor attack had done. A way to profit from these stereotypes was born, and it’s name is Hollywood.

There is a scene from 24, in which the show’s antihero and protagonist, Jack Bauer, is seen torturing a Muslim.

The fear was that someone would watch this show and go out and attack a Muslim, because that is what they think they should do. And although this is just one example, it undoubtedly has had its share of effects on many Americans’ perceptions of Muslims.

This shined through in an episode of the reality show, What Would You Do?, in which a young Muslim woman wearing a hijab is denied service at a local convenience store. A shocking amount of people unknowingly being filmed spoke up and agreed with the man behind the counter when he claimed that she “could have a bomb.”

While there were some who did stand up for the young woman, the bigotry was prevalent.

Whether or not these shows actually contributed to the widespread xenophobia is debatable, however Halbrooks explained why the entertainment industry can sometimes provoke this fear.

“Wouldn’t it be more dramatically creative for a TV show to lead viewers to think that the terrorist is Muslim, then reveal that the person is actually a white person from Sweden?” he asked. “People are naturally afraid of the unknown, so it’s easy for them to make judgments about Muslims because most of us don’t know any of them personally. Because of their skin color, it’s easy to spot them. So that perpetuates the xenophobia. Terrorists don’t wear uniforms. When the U.S. fought the Nazis, we could spot them because of what clothes they wore. When a terrorist seeks to go undetected, people will look for something else to pinpoint them … mostly race, because it just takes eyes to assume that someone with a particular skin color must be from the Middle East and must be a terrorist.”

Too Taboo for TV?

Another important derivation of television that must be considered were the shows that saw no limits to what these stereotypes could provide for them.  It has been said that nothing is off limits to comedians, and that apparently holds very true in the case of some popular satirical television shows.

In possibly one of the most controversial happenings in television, Trey Parker and Matt Stone chose to air an episode of their hit series, South Park satirizing the Muslim prophet, Mohammed. This episode received so much backlash from Muslim extremist groups, that they were forced to censor their depictions of the prophet.  The duo later aired a show in which they depicted terrorist leaders mockingly.

Halbrooks explained that “satirical shows will pick up on ideas in popular culture and twist them for comedy. So I tend to separate a program like that, or The Simpsons, from news programming. But reporters and people in general can only be ‘on alert’ for so long before it gets tiresome.”

So the question now becomes, how far is too far? A comedian will say that nothing is off limits because comedy is meant to provoke people to make them laugh. However, many would disagree and say that certain topics should remain off limits. So where is the line drawn?

Ten years ago, such jokes would not only be taboo, but intolerable. The media seems to have shifted from one extreme to another. The former being the strictly pro-American, anti-terrorism stand that blacklisted those who oppose the White House, and the other being the lax, comically xenophobic way of making fun of those who pose a threat to our nation, and stereotyping those that are of Arab descent.

Despite all of this, some will argue that 9/11 has changed little in the media, specifically in the areas of journalism. Wally Dean, the Director of Training for the Committee of Concerned Journalists said, “9/11 already is an iconic event  …  journalism changed fundamentally because of [Pearl Harbor and the Kennedy Assassination]. World War II started broadcast news …  the Kennedy assassination made broadcast news important. 9/11 didn’t change news. Maybe it should have, but it didn’t.”

And while on the façade, the media remained fundamentally the same, what was going on behind closed doors was the censorship and termination of all that opposed what the public was being led to believe was the truth. In reality, it was a political media invasion, which ultimately ended in the very real invasion of Iraq.

It happened exactly because, as Cohen stated, “brave voices had been pushed off stage, and the more timid … have risen to the top.”

Rachel Maus is a freshman cinema and photography major who wanted this to be funnier – but it’s been censored. Email her at rmaus1[at]ithaca.edu.