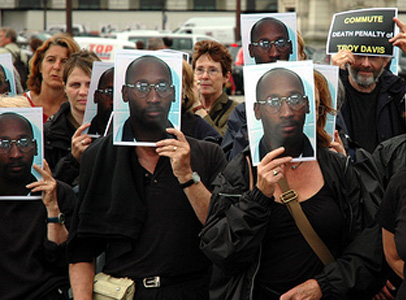 Troy Davis, a victim of the racial and economic inequalities in the U.S. justice system

I spent most of my day on September 21 checking my phone for emails or news articles online. I could not fathom a day where my new electronic device could be more convenient. What I was waiting on was the news of Troy Davis: Whether he would be murdered by the state of Georgia at 7 pm that night.

My interest in the Troy Davis case emerged around late March, while I was studying abroad in London.  I got an e-mail from a friend asking me to sign a petition to get Troy Davis, a man who had been accused of killing a police officer, off of death row. I read the background of the case and signed the petition, thinking that, of course, this man, who had hardly any evidence against him, would receive clemency. What I didn’t take into consideration, I suppose, was that Davis was being convicted in America, where justice is far from fair.

I have been an avid advocate against the death penalty for several years. In that time, I’ve found that the topic of capital punishment  is a topic where finding supporters is difficult. For the most part, no one is in favor of executing an innocent person – I have not come across an individual who is.  However, when the person on death row is judged to be guilty, I find one of two responses: The first is that the individual is in support of the individual’s execution. The second is that the individual is against the execution but apathetic to the case’s outcome.

Over the next few months, I followed Davis’ case casually. I received e-mail updates about how the case was going and how the state was pushing for the murder of this man. As the execution date neared, I became more focused on the case’s outcome.

During the summer, however, the media seemed to be focused on a different criminal case. Twitter accounts were booming and Facebook updates were popping up incessantly this summer regarding the Casey Anthony case. News organizations worked around the clock to bring us the latest updates. The Casey Anthony trial was discussed as if the outcome would somehow represent our current justice system, despite not having any relation to race or class disparity. You cannot accurately critique our justice system without talking about the racial and class inequalities embedded in the institution – such as the prison-industrial complex and the “war on drugs.”

During the media circus, I felt a sense of pride in my generation for challenging our society’s interest behind the trial. The questioning took shape in the form of tweets and status updates. I believed at the time that this form of questioning and communication was better than nothing. At the time of the Casey Anthony trial, I even briefly got wrapped up and neglected the Troy Davis case, a case that represents racial, cultural and historical inequality and oppression.

As a society, we have let Troy Davis down for generations. We allowed ourselves to be distracted by what the media and politics have dictated to us as to what we should find important. When I say we let Davis down, I do not mean that on an individual level, but rather on a social and political level. Davis’case represents racial and class inequality. Wednesday’s outcome of the case, where Davis was executed, is in-your face-proof that we live in a society that values white individuals more than people of color. This is a societal flaw that has existed for generations. This is nothing new, and pretending that Davis’ case is something that presents a new social issue is just as culturally damaging as ignoring it.

Although the Troy Davis archetype is nothing new, I am still weighed down with numbness and disappointment. Davis is evidence that our society is far from equal, and it may be the first time that members of our generation have been confronted with that idea. After all… didn’t inequality end after the Civil Rights movement?  That, at least, is how we have been conditioned to perceive history. Maybe Troy Davis is the wake-up call our generation needs to demand change.

Troy Davis’ physical presence is no longer among us. The fact that Davis’ guilt was not proven beyond a reasonable doubt, and that there is substantial evidence of his innocence, makes his murder tragic.  As a generation, and as a society, we must decide what we will take from this murder. News reports refer to Troy as a “cop-killer,” which is one example of how his accusation has become his identity. Is this acceptable – to reduce a human being to a label that lowers the value of his existence?

The judges involved in this case will not be put on trial for the murder of Troy Davis, nor will any other judge or state politicians that have murdered so many young men and women, especially those of color and living in poverty. So how will a generation respond? Will this be the hot topic to tweet about for the next two months? Will a few people create a fan page with the title “RIP Troy Davis,” while the rest of us like each other’s statuses? If so, we are doing Davis no justice. We will merely be creating an illusion of social change and equality. That illusion can be less productive and more destructive than indecisiveness.

I cannot grasp the concept of the death penalty. I perceive the system as nothing more than proof that we live in racist society. Helen Prejean, one of the sisters of the Sisters of St. Joseph of Medaille, stated, “You can say they deserve to die, but the key moral question is, ‘Do we deserve to kill?’” Taking this question a step further – if some members of our society deserve to kill, then I ask, who is it that they are killing? There is nothing just or equal about judicial murder. All of the statistics will confirm that the people who are being killed are young, impoverished men of color. The death penalty is not the major issue that should be examined when discussing Troy Davis’s murder. Instead, the death penalty should be treated as an extreme example of the real issue: Racial and economic inequalities that exist in our society.