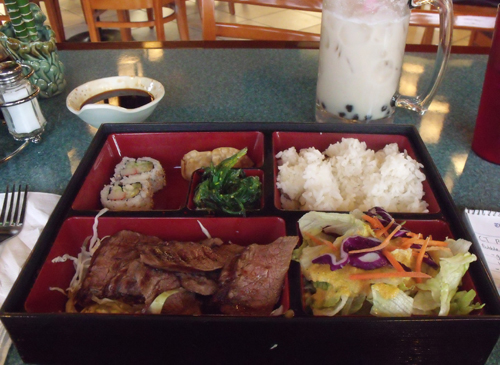 The desire for some Japanese food and a lack of dinner plans prompted me to visit CT Bento Café on a lonely Monday evening, and a simple but flavorful menu made it well worth the trip. The restaurant, which opened in late March, is nestled between the Hampton Inn and Friendly’s on Elmira Road, former home of the Smart Monkey Café. CT Bento Café takes advantage of a newly renovated space and an open floor plan, including a visible kitchen, to create a casual and inviting atmosphere. Small flags and lanterns adorn the ceiling, and a petite bamboo plant adds a charming touch to each table.

Left to my own devices by friends who had other plans, I arrived around 7pm. There were few other patrons at that hour, but the floor accommodates over 20 mahogany-lacquered tables. I was waited on immediately, and even though I came in knowing what I wanted, the menu options forced me to take a second look. CT Bento Café has a plethora of options, from a quick bite to eat to a full meal; one can create 168 combinations of the bowls alone.

I eventually settled on my original plan – the steak bento box with teriyaki sauce, plus an almond bubble tea with milk. This was my first experience with bubble tea, and it exceeded my expectations in every way. I had pictured a normal glass or smoothie-sized cup and tapioca pearls reminiscent of those in my pudding; what I got instead was a beer stein-sized mug filled to the brim with creamy, frothy goodness and pearls the size of small marbles that filled up a good fourth of the mug. 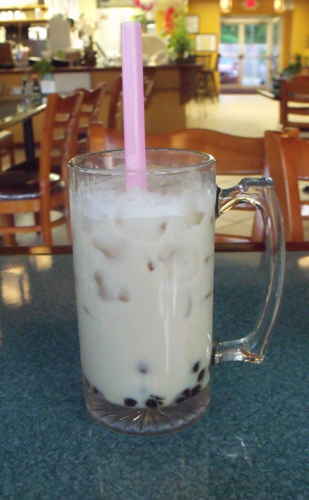 After I proceeded to accidentally inhale a few pearls while trying to suck them up through the oversized straw, my bento box came out almost immediately. While the price might have been a little off-putting to those who aren’t familiar with bento dining, the elegantly finished box provides a sampler of Japanese cuisine’s best. The salad, while a standard American mix of iceberg lettuce, radicchio and carrots, was topped with a ginger dressing that was the perfect blend of tanginess and sweetness and not overpowering in the least. There was also a small portion of seaweed salad, which had an unexplainably dark and sweet taste and just a hint of saltiness, a nice contrast to the ginger.  The gyoza was crunchy on the outside and still moist and tender on the inside, and the two pieces of California roll had a satisfying crisp to them, thanks to the large amount of fresh cucumber. The pièce de résistance was by far one of the best-cooked pieces of steak I have ever had, and the meat was sliced into one- or two-bite pieces, which was perfect for picking up with chopsticks and dipping in the teriyaki sauce. The only downfall that I saw was that the rice was prepared ahead of time, but for me, its stickiness made the rice much easier to eat with chopsticks.

I knew I had an early class the following day, so I decided to skip dessert and instead finish my bubble tea to cap off the smorgasbord of flavors. The check came out to just over $15, so it won’t be an everyday meal, but the variety and amount of food makes CT Bento Café a satisfying weekend spot.