…And Tomorrow, And The Next Day And Next Week

Deadheads. The Ten Club. Rentheads. One of these things is not like the other. Everybody knows about dedicated music fans—those people who travel from city to city following their favorite groups and seeing their concerts dozens, or even hundreds of times.

Lesser known, but just as rabid, are the Broadway buffs, fans as dedicated to their favorite show as Deadheads are to Jerry Garcia’s guitar riffs.

Most prominent are the Rentheads: fans of Rent, a rock musical about a group of musicians and artists living in New York City and dealing with poverty, AIDS and other modern topics. 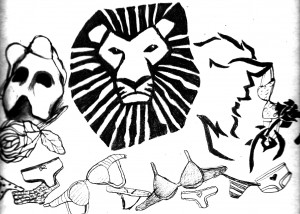 A quick Google search of the term leads to a list entitled, “You might be a Renthead if…” featuring items like, “you’re going to NYU just so you can see Rent all the time,” and, “you want your tombstone to read ‘No Day But Today.’” Now that’s dedication.

But is there really a point in seeing a certain show over and over? Many fans say that you can still have a unique experience no matter how many times you’ve seen the show.

“Live theater is always changing,” Arrigo says, “so it’s interesting to see what an actor brings to it each time.”

Many fans say they like to see differences between casts, bloopers and subtle changes that can only be noticed by those who know the show very well.

“Seeing it many times makes you feel like you’re a part of it,” Erin Gieske, a junior at St. Cloud State University, says. “There’s a sense of pride when [the cast members] do well because you’ve seen them at their best and when they were having rough days too.”

Julie Taber, 32, agrees. “I developed a rapport with some of the cast and crew [of 9 to Five] and now help run a website and message board for one of the leads,” she says. She has seen the show 11 times, between previews in Los Angeles and on Broadway in New York.

“There’s a personal attachment to this show,” stresses Taber.

At some point, doesn’t it just become about quantity rather than quality?

“I think when people lose count of how many times they’ve seen a show it gets ridiculous,” says Camille Ring, a junior at Laguna Beach High School. “But I’ll probably hit that point very soon.” Ring has seen Wicked nine times.

Others say that there is definitely a time when seeing a show many times becomes too many. Natalie Chernicoff, a Bucks County Community College freshman, mentions meeting a woman who has seen Altar Boyz over 200 times.

On average, the cheapest Broadway shows cost $50 to $60 a ticket, and so even if this woman occasionally got discounted tickets from websites or ticket lotteries, she still could have spent upwards of ten thousand dollars.

“There are a million and one better things to do with your money,” Chernicoff says. “That’s more than a semester of my college education.”

Some fans admit to having certain goals beyond just enjoying the show. Taber and Chernicoff both mention getting Playbills signed by cast members. Chernicoff also says that she wants to see the understudies for the cast of Next to Normal, her favorite show, and one that she has seen five times so far. Other fans have similar goals like meeting all the stars at the stage doors, seeing stand-ins or noticing bloopers.

Broadway fans are not ashamed to admit their obsessions. They argue that there are much worse alternatives.

“I get told that I’m crazy, but you know what, I really don’t care what they think,” Ring says. “It’s something that I enjoy and that I love seeing. I could be on the street doing drugs or drinking, but instead I’m enjoying myself in a healthy way.”

“I always remind myself,” she says, “that there are worse ‘addictions’ to spend money on. Like cocaine.”

It’s interesting that both Chernicoff and Ring compare their dedication Broadway to dangerous habits, even if it is to say that Broadway is a safer alternative.

Broadway addicts and drug addicts. Both can be found on the streets of New York City. At least those in love with the stage have a legal, if no less all-consuming, obsession.

Lauren Mateer is a freshman journalism major who has stalked Kristin Chenoweth for years. E-mail her at lmateer1@ithaca.edu.