Family of the Cloth

Four men dressed in orange robes, a handful of students and 12 Tibetan families. This is not a description of the “average American family.” 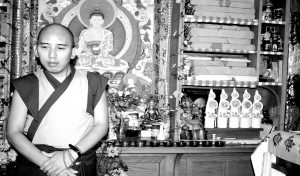 Society’s perception of family is ever broadening. With divorce, single parents, same-sex couples and interracial couples, the possibilities of family structure are endless. For most members of society, however, the image of a family probably doesn’t include the members of a Tibetan Buddhist monastery.

Namgyal is a Buddhist monastery and Institute of Buddhist studies located in downtown Ithaca. It serves as home to four resident Tibetan monks, school for its students and a place of worship for members of Ithaca’s Buddhist community. According to the monastery’s Web site, Namgyal was established in 1992 and is described as “the North American Seat of the Personal Monastery of His Holiness the Dalai Lama.” The monastery is a branch of the core Namgyal Monastery, located in Dharamsala, India. The Web site explains, “The primary mission of the newly-established Ithaca branch was to offer Western students the opportunity to study authentic Tibetan Buddhism in a monastic setting.”

Namgyal is something different from the social norm of family, something special. Professor Brian Karafin, assistant professor of philosophy and religion at Ithaca College, explains that Buddhists have views on family that differ from most other cultures. Karafin says Buddhists “take the unconditional love for their birthmother and generalize [it] to relationships with all people.” In this sense, there is no true differentiation between the birth family and the global population. This means the monks of Namgyal have more family than most could imagine.

Although much has changed in the past few centuries, the Buddhist practice has remained fairly constant. Karafin describes the traditional Tibetan monastic life as “a social connection within the community.” He mentions that children would be sent to the monasteries by their families to be taught and raised. Locals would bring food to the monks in return for their teaching. One of Namgyal’s resident monks, Venerable Tenzin Thutop, confirms that these traditions are presently practiced at Namgyal as well. He says approximately 55 to 60 Tibetans currently live in the Ithaca area.

The relationship between the local Tibetans and the Namgyal monks seems to correlate to the American notion of “extended family.” Venerable Thutop says the Tibetan families join the monks at Namgyal for both religious and Tibetan holidays, when a highly respected teacher visits, for community prayers and for evening meditation. On the first Friday of every month a local Tibetan family hosts the monks for dinner and prayer. Doesn’t this sound like the aunt and uncle who visit for holidays and come over for dinner every once in a while?

If the Tibetans are akin to the extended family, then the students could be considered the children – or rather, nieces and nephews. Venerable Thutop said the relationships differ between each student and each monk. Some are very close — the students may have the monk over for dinner or even go on an outing together. However, some relationships are purely student-to-teacher, where the relationship ends at the monastery’s door.

There are other students who attend the institute as well. The tradition of monks teaching Tibetan children is continued at Namgyal. Although the children go to “ordinary” school during the week, they receive their Buddhist and Tibetan studies at the monastery. Namgyal aims to keep Tibetan tradition and language, as well as Buddhist culture, alive in the Tibetan youths of Ithaca.

The most traditional familial relationship seen in monastic life is between the resident monks themselves. They are brothers. Each venerable has a personal sleeping quarter, but the rest of the monastery, which includes the kitchen, library and shrine room, is communal. On a day-to-day basis each monk has duties he must complete, such as cooking, cleaning and yard work. The monks call them “duties.” Americans call them “chores.”

Prayer is a dominating force in the lives of the monks. Throughout the day, each monk participates in individual reflection and community prayer Venerable Thutop explains, on average, the monks will pray on their own at least once a day. As a group, the monks participate in evening meditation, community prayer and most meals during the week.

Outside of the monastery, two of the monks usually complete shopping tasks and they rotate responsibilities for each outing. Whenever a long trip is available, all of the monks will go as a group, during which time Namgyal closes. These trips are usually due to the stateside visit of either an important Tibetan or Buddhist figurehead. The monks basically take “family vacations” and split their chores up evenly, reminiscent of a typical family dynamic. 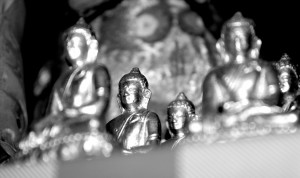 One way the monks of Namgyal differ from any other family is their treatment of each other. Within the walls of Namgyal, there are no loud arguments, no slamming of doors, no competitiveness. The home of the family of monks is a quiet and peaceful place – they are a family of serenity.

Professor Karafin cites Bodhi sattva as a core doctrine of the Buddhist faith. Meaning “motivation by compassion to do your spiritual work for the benefit of others,” it is the drive that Tibetan men have to have to become monks. Bodhi sattva is also the reason that the Namgyal monks harmonize as a family. There is no singular man in the monastery. They are a family of cloth, working toward spiritual achievement for all people, their local ‘family’ and all citizens of the world. The Namgyal monks are not limited by the conventional restrictions of family. They are members of a much greater family: humanity.
_____________________________________
Kacey Deamer is a freshman journalism major. E-mail her at kdeamer1@ithaca.edu.