Home ArchiveFamily The Jetsons: Family of the Past
FamilyMinistry of Cool

The Jetsons: Family of the Past

Space savvy fam teaches us how to live 1950s style

The year is 2062. The sidewalks move and fold-up flying cars travel through the sky. The standard workday lasts three hours, three days a week, and the hottest vacation spot this year is on Venus. Sylvester Stalone has completed his latest project, Rocky 912.

However, mail is still delivered by the postal service, and there is no concept of e-mail. Video games haven’t advanced past the 1980s and while a computer can select clothing combinations, it’s displayed on a screen by a 1970s-style projector. This futuristic, yet oddly archaic, utopia exists in none other than the classic cartoon, The Jetsons.

First airing in 1962, The Jetsons has been a pop culture icon for generations thanks to Saturday morning cartoons and endless Cartoon Network re-runs. The show stars a white, upper-middle class family living in the late 21st century. Even though The Jetsons takes place in the “future,” the show is actually a depiction of the past. Rather than 2062, the show is a projection of the 1950s in a space-age setting.

Professor Michael Smith, who teaches a course called History of the Future at 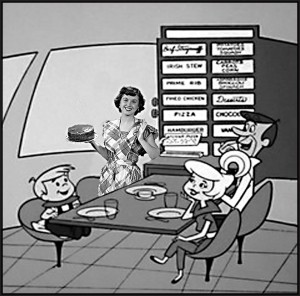 Ithaca College, believes The Jetsons says more about the past than it does about the future.

“Any artifact that proposes to be about the future is really about the moment in time when it was created,” he said. “The Jetsons is about the consensus culture of the ‘50s and early ‘60s—the nuclear family, the dad goes to work—every element of that right down to the robot dog is right out of Leave it to Beaver in terms of what it’s saying about society.”

Rather than a “futuristic” family, the Jetsons look like the Cleavers—working father, domestic mother, two obedient children—the perfect nuclear family, a notion of perfection that has evaporated over the years. During its original run from 1962-63, the storylines of each episode followed the standard ‘50s sitcom plotlines. It wasn’t until the 1980s when the plotlines became more complex, and by then the show began to look like the ‘80s projection of the future.

“The biggest influence from the time period was the development of the space race and the dawn of the space age, and the U.S. and the Soviets were aggressively pursuing this quest for the moon,” Smith said. “It was an age of blue sky dreams.”
The predictions the show made about the future applied to ideas about lifestyle. The creators of The Jetsons had an obvious utopian view of the future in which machines have almost reduced all manual labor and leisure is the central focus of society. Technology is perceived as a positive thing and robots are helpful and benign, not self-aware killer “terminators”.

“Humans are almost limited by what they can and cannot imagine,” Smith said. “If you look at most artifacts about the future, sometimes they predict things accurately, but you just can’t think beyond the cultural norms of your own world.”

In 2012, it is reported the Jetsons will make their first debut in the “future” century in which they live. The Internet has been buzzing with rumors about the production since 2007, and it will be the first live-action venture into The Jetsons universe.

Director Robert Rodriguez, who has done everything from Spy Kids to Sin City, is the only major name to be signed as of now. No actors have been cast yet, but the project is currently in development and is rumored to have a completed script. While the movie will surely retain some of its ‘50s elements, it will represent the current 21st century vision of the future.

“As most televisions shows, even today, will reveal, they’re holding a mirror up to the world that they’re a part of,” Smith said.

Perhaps the reason The Jetsons has renewed itself for each new generation is because we wonder what the future looks like, but also because we are curious as to what the program says about our culture in the past.

Sarah McCarthy is a junior journalism major. E-mail her at smccart1@ithaca.edu.