Beyond the Screaming Tea-Parties

This fall, the U.S. House of Representatives will debate a bill that could radically transform this country’s health care system. Its proponents say it will give every American access to health care, while its opponents consider it a massive government takeover of the health care system.

However, this bill has not been shouted down by “tea partiers” at town halls, and the president has not delivered any addresses in support of it.

In fact, this bill has not really been discussed at all—not by many politicians, not by many pundits and not by most of the media.

The bill is H.R. 676, and it is the health care reform bill nobody is talking about.
Introduced by Rep. John Conyers, D-Mich., H.R. 676, also known as the United States National Health Care Act, calls for the creation of a universal single-payer health care system in the U.S. The bill, which has 78 co-sponsors, calls for the government to provide all U.S. residents with free medical coverage. And while H.R. 676 may not be getting the attention of its more obese cousin H.R. 3200—the former is 30 pages long compared with 1,017 pages for the latter—its backers say it is the only way to bring true reform to the U.S. health care system. 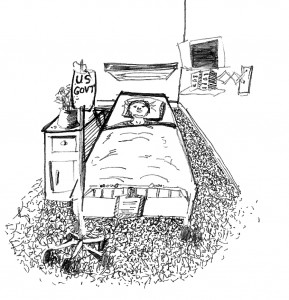 One of those backers is Dr. Andy Coates, a physician and chairman of the grassroots organizing body Single Payer New York.

Coates said in the search for a uniquely American health care system, people should look to Medicare as an example, or even the fully socialized VA health care system for veterans. He said expanding Medicare to everyone is the most efficient way to achieve universal health care access.

“Every patient would be able to know that all necessary medical care is going to be paid for without co-pays and without deductibles,” Coates said.

Coates said it is not only activists but medical professionals who support the creation of a single-payer system. He points to a 2008 study by Dr. Aaron Carroll of the University of Indiana, which found that 59 percent of doctors support the establishment of a national health insurance system.

A more recent study, published in the New England Journal of Medicine in September, showed 63 percent of doctors support a system with both public and private options, with an additional 10 percent supporting an entirely public system.

President Obama has also said if he were starting from scratch he would advocate for a single-payer plan. But the president indicated in his Sept. 9 speech to Congress that he has “no interest in putting insurance companies out of business.” He went on to explain that dismantling the current system would have serious repercussions for the employees of the insurance industry, but many single-payer advocates disagree with that argument.

“The displacement of those workers is a very serious problem, but the Congress has anticipated that, and has come up with a very reasonable way to deal with it,” Coates said.

He was referring to a provision in H.R. 676 that would pay displaced insurance workers’ salaries for two years while they are retrained.

Coates said there is a precedent for such a transition to a single-payer system. He cites the example of Taiwan, which, according to the Annals of Internal Medicine had 40 percent health insurance coverage for its citizens in 1995. That year the country underwent a political crisis, and under pressure, the government instituted a national single-payer system. By 2004, 99 percent of the population was insured. Coates said it remains one of the most popular systems in the world.
Rob Brown, the office manager for the Ithaca Health Alliance, said one needs to look no further than Tompkins County for evidence of the inequality in the American system.

“One of the commonest stories we hear from our members and visitors to the free clinic is until they came to us they put off dealing with health concerns for many years,” Brown said. “They would rather die from not dealing with it, than die in debt and leave that for their families to deal with.”

The alliance expanded in 2004 with the creation of the Ithaca Free Health Clinic, and Brown says the heavy traffic through the clinic further demonstrates the need for reform. In its first year the clinic saw 861 patient visits; they have projected 2,300 visits for 2009.

While the alliance takes no political stand on the issue of health care reform, Brown said he personally believes socialized medicine would be the most effective system.

“It ensures consistency, standards and access. It allows a centralized force to evaluate shortages in provider coverage,” Brown said. “But a single-payer system would be a nice second alternative.”

Single-payer advocates say the only losers under the system they propose would be the insurance companies. They say evidence of the health insurance companies’ intense lobbying power can be seen all over H.R. 3200 and its partner in the Senate.

Brown called the Senate Finance Committee version of the bill a mess. He was quick to point out that the chairman of that committee, Sen. Max Baucus, D-Mont., has received a great bulk of his contributions from insurance companies.
In July, The Washington Post reported that Baucus was one of the leading recipients in health industry contributions. According to the article, Baucus received $1.5 million in 2007 and 2008 from health-related industries and their employees.

According to the Center for Responsive Politics, in the first half of 2009 the health service and HMO sector spent $35 million lobbying Washington politicians—a number that activists say explains the exclusion of single-payer from the debate.
But as it turns out single-payer advocates may have a chance to argue their case in front of the U.S. House this fall.

During debates over the House Energy and Commerce Committee version of H.R. 3200, Rep. Anthony Wiener, D-N.Y., suggested an amendment that would completely replace the language of H.R. 3200 with that of H.R. 676. Before the measure could be debated, committee Chairman Rep. Henry Waxman, D-Calif., told Wiener that Speaker of the House Nancy Pelosi had indicated to him such a measure would be debated by the whole House when the merged bill comes to the floor — something that has energized single-payer advocates across the country.
“We think that this is a great victory and a great mark of our success,” Coates said.

Even if Wiener’s substitution amendment is defeated, some progressives see promise in an amendment that made its way into the House Education and Labor Committee version of H.R. 3200.

That amendment, proposed by Rep. Dennis Kucinich, D-Ohio, allows for individual states to adopt a single-payer system if they so choose. For some, this process is reminiscent of the development of Canada’s health care system. The Canadian single-payer system got its start as an experiment in Saskatchewan and grew from there.

However, Coates said the inclusion of such an amendment in H.R. 3200 does not make up for what he sees as serious shortcomings in that bill—a sentiment he shares with many progressives.

“I would point out that Dennis Kucinich himself has recently said that even if his own amendment is on the bill it doesn’t make the bill something that he wants to vote for.”