“Burn it Down:” The Detriments of the “Skinny-Jean Rap” Phenomenon 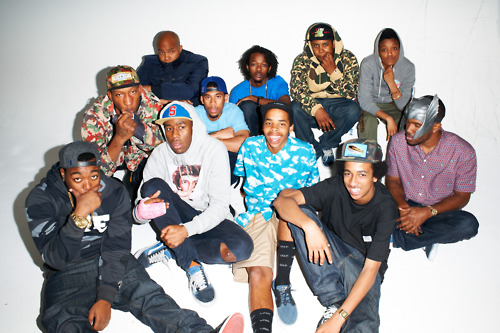 Image by Terry Richardson, via oddfuture.tumblr.com

I should begin by saying that I whole-heartedly love the musical stylings of Frank Ocean, Tyler the Creator, and the rest of the Odd Future clan. I like what they’re bringing to hip-hop, spoken word, and (this is more of a nod to Frank) the movement towards sexual equality.

That being said, I dislike their influence on men’s fashion. The “hipster” fashion movement has trickled down to mainstream status, and has infiltrated hip-hop in a way that is new, but ultimately isn’t very innovative or, well– distinguished. It’s one thing to have an irreverent homage to a hip-hop artist or album in your clothing, because it showcases your tastes and unique sense of clothing composition. Yet when you’re repping over-sized hoodies, large non-prescription glasses, and a “tribal” print that has no actual Native American affiliation, you’re demonstrating a style that is painfully self-aware of its origins.

Unique style is marked by the fact that it is personal. By this I mean that it is something that should belong to you and be a composite of all the political and cultural things that represent you. But by emulating the “Odd Future Style” (for lack of a better term) you’re presenting yourself as someone who is drawing influence from a certain group of individuals, who frankly, (oh puns) look like little boys.

All fashion trends have elements that are attractive and speak to people– that’s why they become trends to begin with. But truly fashionable people know how to find those elements and create a picture that is bigger than the place they borrowed it from.

For example, the Odd Future clan are style-composites of other groups such as Kidz in the Hall, Cali Swag District, and even a Tribe Called Quest. Frank, Tyler, Hodgy, Earl, Mike G. and so forth, are all epitomizing a style known as “skinny-jean rap,” that has become more accepted with the rise of their fame. Yes, they have spun it in a new direction with their Urban Outfitter’s-esque prints and accessories, but all the same– their influence came from somewhere.

As a result, I have to give them credit in that sense, because they’ve made a style for themselves and for the public to emulate. Not to mention that there’s something kinda awesome about a guy buttoned up to the jugular in a sleeveless oxford with some kind of LSD-ridden cheetah print on it, rapping about ripping out Bruno Mars’ “god-damn esophagus.”

But while they get points for contradiction (always a crucial aspect of fashion), their all around product is ultimately less than satisfactory. Regardless of what you hope to achieve with your personal style, once you reach a certain age, your goal should be to look like a man. Capable and worldly men do not wear, for all intents and purposes foot-pajamas with high top sneakers and a laser-cats t-shirt.

Don’t get me wrong, I am a proud supporter of the “man-child,” in all his gaming, collecting, and nerdy glory. But that Star Wars one-of-a-kind t-shirt can be worn with a blazer, and that neon green button up can be tucked into slacks and a belt. Furthermore, that prized hoodie can be 3 sizes smaller and worn with a v-neck shirt and nice jeans.

My point is that while Odd Future nicely demonstrates disparity in their fashion choices, they aren’t ultimately the people you want to emulate when you get dressed in the morning. You, my lovely male friends, are not barely legal rappers with Ray-Ban shades of fame and neon prints of glory. You are real men on the cusp of graduation and that dreaded thing known as “real life.” Embrace that maturity.

The fashion community is notorious for welcoming innovative style, so take advantage and shoot for something different yet appropriate. Look at street style, find what you like, and make it work for you.

In other words, keep listening to Ocean, but start dressing like Sinatra.