Don’t Make It More Awkward Than It Already Is 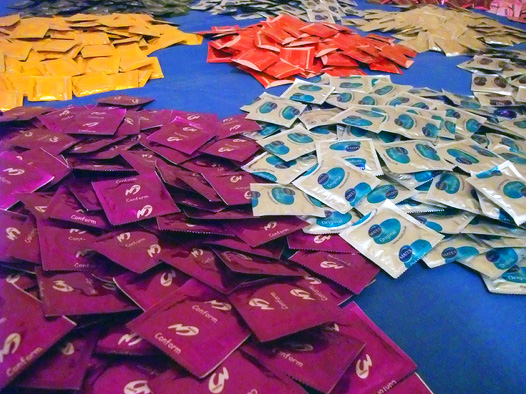 The scene was set: it was the first time my former boyfriend and I were really fully alone together. We worked at a sleep away camp together, and despite having moments we could sneak off together, it never felt completely private. We both knew what was coming, and after a few awkward fumbling with clothes and a wrapper I had to stop: The condom was green.

Now to be fair, the color of his protection was not his fault. It was a condom given to him by a co-worker, not one of his own choosing. But I still couldn’t help but feel completely turned off – and honestly a little disgusted. To him, it was a condom; to me, it was like a molding stick was about to be inside of me.

I had long been aware that condoms do come in a variety of colors, textures, flavors, and even glow-in-the-dark. But this was the first time I had ever encountered one. Why make the elephant in the room an even brighter shade of pink? Condoms already face the chance of being awkward – and there really is no sexy way to put one on. But adding the extra element of “flair” can make it even worse.

My friend Liz* had once faced a similar dilemma. “I remember looking down once while I was with a guy and freaking out … I thought I was bleeding every where. It turned out to just be a red condom, but I couldn’t keep going. I was way too freaked out.”

A condom, though similar in a lot of ways, is not a balloon. There is no need for it to be colored and festive, despite the idea of having a ‘party in your pants.’ Keep it classy by keeping it simple. But most importantly, keep it safe kids.